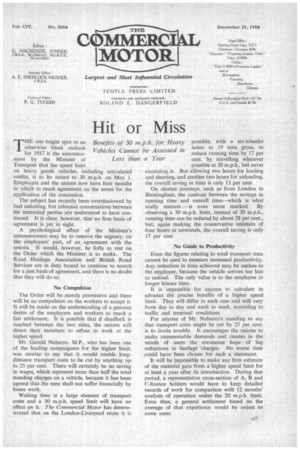 Page 29, 21st December 1956 — Hit or Miss
Close
Noticed an error?
If you've noticed an error in this article please click here to report it so we can fix it.
Keywords : Traffic Law, Road Safety, Law Enforcement, Speed Limit, Speed Limits In The United States, Labor

THE one bright spot in an otherwise bleak outlook for 1957 is the announcement by the Minister of Transport that the speed limit on heavy goods vehicles, including articulated outfits, is to be raised to 30 m.p.h. on May 1. Employers and the unions now have four months in which to reach agreement on the terms for the application of the concession.

The subject has recently been overshadowed by fuel rationing, but informal conversations between the interested parties are understood to have continued. It is clear, however, that no firm basis of agreement is yet in sight.

A psychological effect of the Minister's announcement may be to remove the urgency, on the employers' part, of an agreement with the unions. It would, however, be folly to rest on the Order which the Minister is to make. The Road Haulage Association and British Road Services are in duty bound to continue to search for a just basis of agreement, and there is no doubt that they will do so.

No Compulsion The Order will be merely permissive and there will be no compulsion on the workers to accept it. It will be made on the understanding of a genuine desire of the employers and workers to reach a fair settlement,. It is possible that if deadlock is reached between the two sides, the unions will direct their members to refuse to Work at the higher speed.

Mr. Gerald Nz.tbarro, M.P.. who has been one of the leading campaigners for the higher limit, was unwise to say that it would enable longdistance transport costs to be cut by anything up to 25 per cent. There will certainly be no saving in wages, which represent more than half the total standing charges on a vehicle, because it has been agreed that the men shall not suffer financially by faster work.

Waiting time is a large element of. transport costs and a 30 m.p.h. speed limit will have no effect on it. The Commercial Motor has demonstrated that on the London-Liverpool route it is possible, with a six-wheeler laden to 19 tons gross, to reduce running time by 17 per cent. by travelling wherever possible at 30 m.p.h., but never exceeding it. But allowing two hours for loading and sheeting, and another two hours for unloading, the overall Saving in time is only 13 per cent.

On shorter journeys, such as from London to Birmingham, the contrast between the savings in running time and overall time—which is what really matters —is even more marked. By observing a 30 m.p.h. limit, instead of 20 m.p.h., running time can be reduced by about 28 per cent., but, again making the conservative estimate of four hours at terminals, the overall saving is only 17 per cent.

No Guide to Productivity Even the figures relating to total transport time cannot be used to measure increased productivity. Any reduction in time achieved may be useless to the employer, because the vehicle arrives too late to unload. The only value is to the employee in longer leisure time.

It is impossible for anyone to calculate in advance the precise benefits of a higher speed limit. They will differ in each case and will vary from day to day and week to week, according to traffic and terminal conditions.

For anyone of Mr. Nabarro's standing to say that transport costs might be cut by 25 per cent. is to invite trouble. It encourages the unions to make unreasonable demands and creates in the minds of users the erroneous hope of big reductions in haulage -charges. No worse time could have been chosen for such a statement.

It will be impossible to make any firm estimate of the material gain from a higher speed limit for at least a year after its introduction. During that period, a representative cross-section of A, B and C-licence holders would have to keep detailed records of work for comparison with 12 months' analysis of operation under the 20 m.p.h. limit. Even then, a general settlement based on the average of that experience would be unjust to some users.