Fare Stages to be Restored 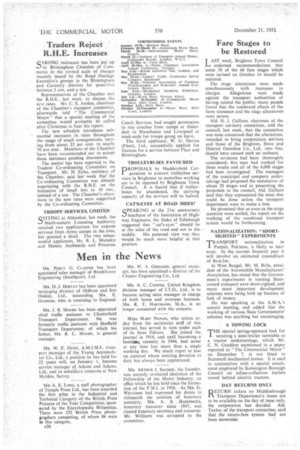 Page 28, 21st December 1951 — Fare Stages to be Restored
Close
Noticed an error?
If you've noticed an error in this article please click here to report it so we can fix it.
Keywords : Brighton, Brighton And Hove, Monarch's Way, Nationalization, Railway Electrification System

LAST week, Brighton Town Council endorsed recommendations that some 30 of the 68 fare stages which were revised on October 14 should be restored.

Aid. H. J. Galliers, chairman of the transport advisory committee, told the council, last week, that the committee was most concerned that the alterations, intended to bring corporation services and those of the Brighton, Hove and District Omnibus Co., Ltd., into line, should have caused such an outburst.

The revisions had been thoroughly considered; five men had worked for three weeks and all of the 4,000 stages had been investigated. The managers of the municipal and company undertakings had proposed the restoration of about 30 stages and in presenting the proposals to the council, Aid. Galliers said that they represented the most that could be done unless the transport department were to make a loss.

He promised that as soon as the stage question were settled, the report on the working of the combined transport system would be forthcoming.

NATIONALIZATION: "SHORTSIGHTED" EXPERIMENTS TRANSPORT nationalization in 1 Punjab, Pakistan, is likely to start soon. In the current financial year it Will involve an estimated expenditure of Rs.6.5m.,

In %Vest Bengal, Mr. M. Birla, president of the Automobile Manufacturers' Association, has stated that the Government's experiments in running Stateowned transport were short-sighted, and many more important development schemes were being held up because of lack of money.

He was speaking at the A.M.A.'s annual meeting, and added that the working of various State Governments' schemes was anything but encouraging.

THE special spring-operated lock for

securing a semi-trailer turntable to a tractor undercarriage, which Mr. .C. N. Graddon mentioned in a paper reported in "The Commercial Motor" on December 7, is not fitted to Scammell mechanical horses. It is used in conjunction with a special attachment employed by Kensington Borough Council on refuse-collection trailers towed behind electric tractors.

RETURN tickets on Middlesbrough Transport Department's buses are to be available on the day of issue only, the corporation has decided, Aid. Taylor, of the transport committee, said that the return-fare system had not been economic.