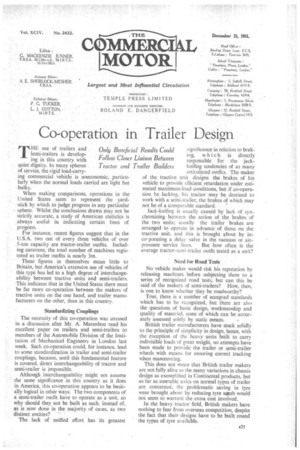 is developOnly Beneficial Results Could ing in this country with Follow Closer Liaison Between quiet dignity, in many spheres Tractor and Trader Builders of service, the rigid load-carry ing commercial vehicle is uneconomic, particularly when the normal loads carried are light but bulky.

When making comparisons, operations in the United States seem to represent the yardstick by which to judge progress in any particular sphere. Whilst the conclusions drawn may not be strictly accurate, a study of American statistics is always useful in indicating certain lines of progress.

For instance, recent figures suggest that in the U.S.A. two out of every three vehicles of over 5-ton capacity are tractor-trailer outfits. Including caravans, the total number of machines registered as trailer outfits is nearly 3m.

These figures in themselves mean little to Britain, but America's extensive use of vehicles of this type has led to a high degree of interchangeability between tractive Units and semi-trailers. This indicates that in the United States there must be far more co-operation between the makers of tractive units on the one hand, and trailer manufacturers on the other, than in this country.

The necessity of this co-operation was stressed in a discussion after Mr. A. Marenbon read his excellent paper on trailers and semi-trailers to members of the Automobile Division of the Institution of Mechanical Engineers in London last week. Such co-operation could, for instance, lead to some standardization in trailer and semi-trailer couplings, because, until this fundamental feature is covered, direct interchangeability of tractor and semi-trailer is impossible.

Although interchangeability might not assume the same significance in this country as it does in America, this co-operation appears to be basically logical in other ways. The two components of a semi-trailer outfit have to operate as a unit, so why should they not be built as such, instead of, as is now done in the majority of cases, as two distinct entities?

The lack of unified effort has its greatest significance in relation to brak ing, which is directly responsible for the jack knifing tendencies of so many articulated outfits. The maker of the tractive unit designs the brakes of his vehicle to provide efficient retardation under estimated maximum-load conditions, but if co-operation be lacking, hi traitor may be destined to work with a semi-trailer, the brakes of which may not be of a comparable standard.

Jack-knifing is usually caused by lack of synchronizing between the action of the brakes of the two units; usually the trailer brakes are arranged to operate in advance of those on the tractive unit, and this is .brought about by inco.porating a delay valve in the vacuum or air pressure service lines. But how often is the average tractor-semi-trailer outfit tested as a unit?

No vehicle maker would risk his reputation by releasing machines before subjecting them to a series of recognized road tests, but can this be • said of the makers of semi-trailers? How, then, is one to know whether they be roadworthy? True, there is a number of accepted standards which has to be recognized, but there are also the questions of basic design, workmanship and quality of material, none of which can be accurately assessed solely by static means.

British trailer manufacturers have stuck solidly to the principle of simplicity in design, hence, with the exception of the heavy units built to carry indivisible loads of great weight, no attempts have been made to provide the trailer or semi-trailer wheels with means for ensuring correct tracking• when ,manreuvring.

This does not mean that British trailer makers are not fully alive to the many variations in chassis design as exemplified in Continental products, but as far as steerable axles on normal types of trailer are concerned, the problematic saving in tyre wear brought about by reducing lyre sub would not seem to warrant the extra cost involved.

in the heavy tractor field, British makers have nothing to fear from overseas competition, despite the fact that their designs have to be built round the types of tyre available.