Appeal Decision to be Contested 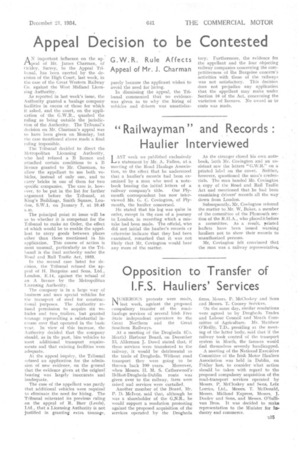 AN importantinfluence on the appeal of Mr. James Charrnan, of Ockley, Surrey, to the Appeal Tribunal, has been exerted by the decision of the High Court, last week, in the case of the Great Western Railway Co. against the West Midland Licensing Authority..

As reported in last week's issue, the Authority granted a haulage company facilities in excess of those for which it asked., and the court, on the application of the G.W.R., quashed the ruling as being outside the jurisdiction of the Authority. The Tribunal's decision on Mr. Charman's appeal was to have been given on. Monday, but the case Mentioned above made a final ruling impoiSible.

The 'Tribunal decided to direct the Metropolitan Licensing Authority, who had refused a B licence and attached certain conditions to a B licence granted to Mr. Charman, to allow the appellant to use both vehicles, instead of only one, and to carry bricks in one of them for two specific companies. The case is, however, to be put in the list for further argument before the Tribunal, at King's Buildings, Smith Square, London, S.W.1, on January 7, at 10.45 a. m.

The principal point at issuewill be as to whether it is competent for the Tribunal to make an Order, the .effect of which would be to enable the appellant to carry goods between places other than those mentioned in his application. This course of action is most unusual, particularly as the Tribunal is the final authority under the Road and Rail Traffic Act, 1933.

In the second case listed for decision, the Tribunal refused the appeal of H. Burgoine .and Sons, Ltd., London, E.14, against the refusal of an A licence by the Metropolitan Licensing Authority.

The company is in a large way of business and uses special vehicles for I he transport of steel for constructional purposes. The Authority refused permission to acquire six vehicles and two .trailers, but granted tonnage representing a substantial increase over that operated in the basic year. In view of this increase, the Authority decided that the company should, as in the past, hire vehicles to meet additional transport requirements and that existing facilities were adequate.

At the appeal inquiry, the Tribunal refused an application for the admission of new evidence, on the ground that the evidence given at the original. hearing was largely inaccurate and inadequate.

The case of the appellant was partly that additional vehicles were required to eliminate the need for hiring. The Tribunal reiterated its previous ruling on the appeal of R. Barr (L.eeds), Ltd., that a Licensing Authority is not justified in granting extra tonnage, purely because the applicant wished to avoid the need for hiring.

In dismissing the appeal, the Tribunal commented that no evidence. was given as to why the hiring of vehicles and, drivers was unsatisfac

tory: Furthermore, the evidence for the appellant and the four objecting railway companies concerning the competitiveness of he Burgoine concern's activities with those of the railways was not satisfactory. This decision does not prejudice any application that the appellant. may make under Section 10 of the Act, concerning the variation of licences. No award as to costs was made.