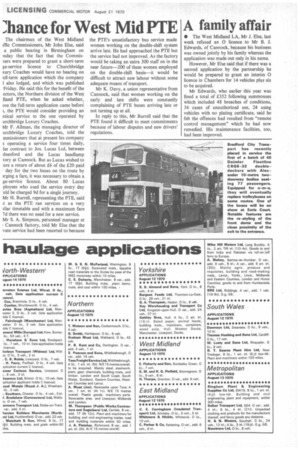 Page 31, 21st August 1970 — A family affair
Close
Noticed an error?
If you've noticed an error in this article please click here to report it so we can fix it.
Keywords : Cannock, Cannock Chase, Business / Finance

• The West Midland LA, Mr J. Else, last week refused an 0 licence to Mr B. J. Edwards, of Cannock, because his business was owned jointly by his family whereas the application was made out only in his name.

However, Mr Else said that if there was a second application by the partnership he would be prepared to grant an interim 0 licence in Chambers for 14 vehicles plus six to be acquired.

Mr Edwards, who earlier this year was fined a total of £352 following summonses which included 48 breaches of conditions, 34 cases of unauthorized use, 24 using vehicles with no plating certificate, said he felt the offences had resulted from "remote control management" which he had now remedied. His maintenance facilities, too, had been improved.

People: B. J. Edwards, J. Else
comments powered by Disqus