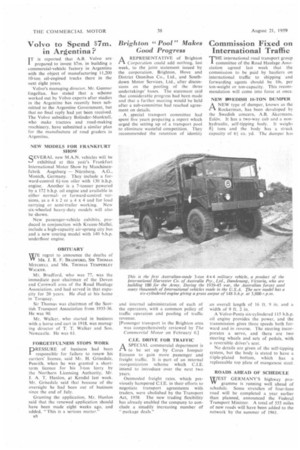 Page 42, 21st August 1959 — Brighton "Pool" Makes Good Progress
Close
Noticed an error?
If you've noticed an error in this article please click here to report it so we can fix it.

A REPRESENTATIVE of Brighton PA. Corporation could add • nothing. last week, to the joint statement issued by the corporation, Brighton, Hove and District Omnibus Co., Ltd., and Southdown Motor Services, Ltd., after discussions on the pooling of the three undertakings' buses. The statement said that considerable progress had been made and that a further meeting would be held after a sub-committee had reached agreement on details.

. A special transport committee had spent five years preparing a report which urged the setting up of a transport pool to eliminate wasteful competition. They recommended the retention of identity

and internal administration of each of the operators, with a common policy of traffic operation and pooling of traffic revenue.

[Passenger transport in the Brighton area was comprehensively reviewed by The Commercial Motor on February 6.]

ASPECIAL commercial department is to be set up by Coras Iompair Eireann to gain more .passenger and freight traffic. It is part of an internal reorganization scheme which C.I.E. intend to introduce over the next two years.

Outmoded freight rates, which previously hampered C.I.E. in their efforts to negotiate transport agreements with traders, were abolished by the Transport Act, 1958. The new trading flexibility has already enabled the company to conclude a steadily increasing number of package deals."