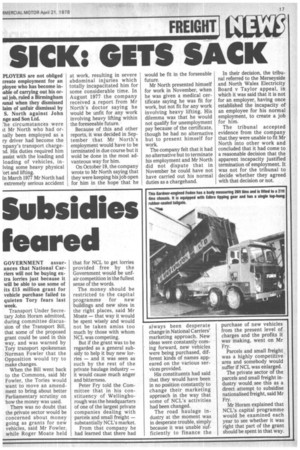 Page 19, 21st April 1978 — subsidies feared
Close
Noticed an error?
If you've noticed an error in this article please click here to report it so we can fix it.
Keywords : Freight Train, Trains, Haulage, Truck

GOVERNMENT assurances that National Carriers will not be buying extra lorries just because it will be able to use some of its £15 million grant for vehicle purchase failed to quieten Tory fears last week.

Transport Under Secretary John Horam admitted, during committee discussion of the Transport Bill, that some of the proposed grant could be used in this way, and was warned by Tory transport spokesman Norman Fowler that the Opposition would try to make changes.

When the Bill went back to the Commons, said Mr Fowler, the Tories would want to move an amendment to bring about better Parliamentary scrutiny on how the money was used.

There was no doubt that the private sector would be concerned about money going as grants for new vehicles, said Mr Fowler, while Roger Moate held that for NCL to get lorries provided free by the Government would be unfair competition in the fullest sense of the words.

The money should be restricted to the capital programme for new buildings and new sites in the right places, said Mr Moate — that way it would be spent wisely and would not be taken amiss too much by those with whom NCL was competing.

But if the grant was to be regarded as a general subsidy to help it buy new lorries — and it was seen as such by the rest of the private haulage industry — it would cause much anger and bitterness.

Peter Fry told the Committee that in his constituency of Wellingborough was the headquarters of one of the largest private companies dealing with parcels and small freight — substantially NCL's market.

From that company he had learned that there had always been desperate change in National Carriers' marketing approach. New ideas were constantly coming forward, new vehicles were being purchased, different kinds of names appeared on the various services provided.

His constituents had said that they would have been in no position constantly to change their marketing approach in the way that some of NCL's activities had been changed.

The road haulage industry at the moment was in desperate trouble, simply because it was unable sufficiently to finance the purchase of new vehicles from the present level of charges and the profits it was making, went on Mr Fry.

Parcels and small freight was a highly competitive area and somebody would suffer if NCL was enlarged.

The private sector of the parcels and small freight industry would see this as a direct attempt to subsidise nationalised freight, said Mr Fry.

Mr Horam explained that NCL's capital programme would be examined each year to see whether it was right that part of the grant should be spent in that way.