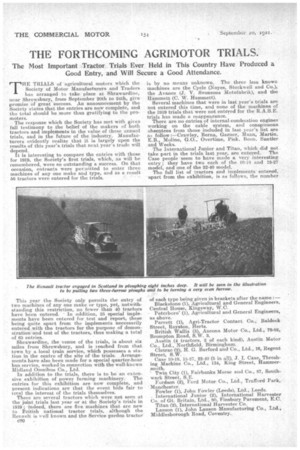 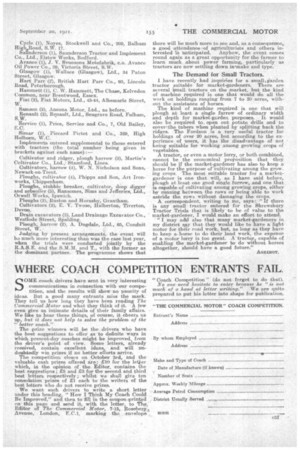 The Most Important Tractor Trials Ever Held in This Country Have Produced a Good Entry, and Will Secure a Good Attendance.

TRE TRIALS of agricultural motors which the Society of Motor Manufacturers and Traders has arranged to take. place at. Shrawardine, near Shrewsbury, from September 20th to 24th, give promise Of great 'success. An announcement by the Society states that the entries are now complete, and the total should be more than gratifying tei the. promoters.

The response which the Society has met with gives full testimony to the belief of the makers of both tractors and implements in the value of these annual trials, and in the future of the industry. Manufacturers evidently realize that it is largely upon the results of this year's trials that next year's trade will depend. It is interesting to compare the entries with those for 1919, the Society's first trials, which, as will be remembered, were so outstanding a. succesa. On that occasion, .entrants were permitted to enter three machines of any one make and type, and as a result 56 tractors were entered for the trials.

This year the Society only permits the entry of two machines of any one make or type, yet, notwithstanding this restriction, no fewer than 40 tractors have been entered. In addition, 25 special implements have been entered for test and report, these being quite apart from the implements necessarily entered with the tractors for the purpose of demonstration'and test. of the tractors, thus making a total of 65 entries.

Shrawardine, the -venue of the trials, is about six miles from Shrewsbury, and is reached from that town by a local train service, which possesses a station in the centre of the site of the trials. Arrangements have also been made for a special quarter-hour bus service, worked in connection with the well-known Midland Omnibus Co., Ltd.

In addition to the trials, there is to be an extensive exhibition of power farming machinery. The entries for this exhibition are now complete, and present indications are that the event bids fair to rival the interest of the trials themselves.

There are several tractors which were not seen at the joint trials last year or at. the Society's -trials in 1919 ; 'indeed, there are five machines that. are new to British national tractor trials, although the Renault is well known and the Service garden tractor c30 is by no means unknown. The three less known machines are the Cycle (Noyes, Stockwell and Co.), the Avarice (J. V. Svonsous Motofabrik), and the Hammett (C. W. Hammett).

There are no entries of internal-combustion engines working on the cable system, and conspicuous absentees from those included in last. year's list are follOw :—Crawley, Berna, Garner, Manna Martin, E.B., Moline, G.O., Overtime, Pick, Boon, Sander and Weeks.

The International Junior and Titan, which did not take part in the trials last year, are entered. The Case people seem to have made a very interesting entry ; they have two each of the 10-18 and /5-27 model, and one of the 22-40 model. The full list of tractors and implements entered, apart from the exhibition, is as follows, the number

Implements ent.ered supplemental to those entered with tractors (the total number being given in brackets against each name) :— Cultivator and ridger, plough harrow (3), Martin's Cultivator Co., Ltd., • Stamford, Lines.

Judging by present arrangement, the event will ho much more interesting than was the case last year, when the trials were conducted jointly by the R.A.S.E, and the S.M.M. and T., with the former as• the' dominant partnerThe programme shows that there will be much more to see and, as a consequence, a good attendance of agriculturists and others interested IS anticipated. Anyhow, the event comes round again as a great opportunity for the. farmer to learn much about power farming, particularly as tractors are now settling down inquake and type.

The Demand for Small Tractors.

I have recently had inquiries for a small4arclen tractor suitable for market-gardeners. There are several -kmall tractors on the market, but the kind of machine required is one that would do all the work on holdings ranging from 7 to 20 acres, 'without the assistanceof horses,

The kind of machine required is one that will plough at least a single furrow of ordinary width and depth for market-garden Purposes. It would also be required to. open out potato drills and to cover)the tubers when planted by splitting back the ridges. The Fordson is a very useful tractor for holdings of over 20 acres, but according to the experience of users, it has the disadvantage of not being suitable for working among growing crops of vegetables.

A tractor, or even a motor lorry, or both combined, cannot be the economical proposition that they should be if the market-gardener has also to keep a horse for the purpose of-cultivating among the growing crops. The most suitable tractor for a marketgardener is one that will, as I have said before, plc-ugh atleast one good single furrow, and one that is capable of cultivating among growing crops, either by running between the rows or being able to work astride therows without damaging the crops.

A correspondent, writing to me, says: "If there is any small tractor entered for the Shrewsbury Tractor Trials that is likely to be of value to the market-gardener, I would make an effort to attend.

• "I may add also that many market-gardeners in. my district saiy that they would like to have a light motor for their road work, but, as long as they have to keep a. /1 OMR to do their land work, the expense of a motor lorry is too great. A tractor, capable of enabling the market-gardener to do without horses altogether, should have a good future."