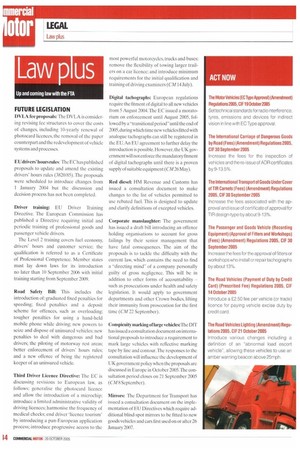 Page 44, 20th October 2005 — FUTURE LEGISLATION
Close
Noticed an error?
If you've noticed an error in this article please click here to report it so we can fix it.

DVLA fee proposals: The DVLA is considering revising fee structures to cover the costs of changes, including 10-yearly renewal of photocard licences, the removal of the paper counterpart and the redevelopment of vehicle systems and processes.

The Level 2 training covers fuel economy, drivers' hours and customer service; the qualification is referred to as a Certificate of Professional Competence. Member states must lay down laws for its introduction no later than 10 September 2006 with initial training starting from September 2009.

Road Safety Bill: This includes the introduction of: graduated fixed penalties for speeding; fixed penalties and a deposit scheme for offences, such as overloading; tougher penalties for using a hand-held mobile phone while driving; new powers to seize and dispose of uninsured vehicles; new penalties to deal with dangerous and bad drivers; the piloting of motorway rest areas; better enforcement of drivers' hours rules; and a new offence of being the registered keeper of an uninsured vehicle.

Third Driver Licence Directive: The EC is discussing revisions to European law, as follows: generalise the photocard licence and allow the introduction of a microchip; introduce a limited administrative validity of driving licences; harmonise the frequency of medical checks; end driver 'licence tourism' by introducing a pan-European application process; introduce progressive access to the most powerful motorcycles, trucks and buses; remove the flexibility of towing larger trailers on a car licence; and introduce minimum requirements for the initial qualification and training of driving examiners (CM 14 July).

Digital tachographs: European regulations require the fitment of digital to all new vehicles from 5 August 2004. The EC issued a moratorium on enforcement until August 2005, followed by a -transitional period" until the end of 2005, during which time new vehicles fitted with analogue tachographs can still be registered in the EU. An EU agreement to further delay the introduction is possible. However. the UK government will not enforce the mandatory fitment of digital tachographs until there is a proven supply of suitable equipment (CM 26 May).

Red diesel: HM Revenue and Customs has issued a consultation document to make changes to the list of vehicles permitted to use rebated fuel. This is designed to update and clarify definitions of excepted vehicles.

Corporate manslaughter The government has issued a draft bill introducing an offence holding organisations to account for gross failings by their senior management that have fatal consequences. The aim of the proposals is to tackle the difficulty with the current law, which contains the need to find a "directing mind" of a company personally guilty of gross negligence. This will be in addition to other forms of accountability — such as prosecutions under health and safety legislation. It would apply to government departments and other Crown bodies, lifting their immunity from prosecution for the first time (CM 22 September).

Conspicuity marking of large vehicles:The Dfir has issued a consultation document on international proposals to introduce a requirement to mark large vehicles with reflective marking tape by line and contour. The responses to the consultation will influence the development of UK government policy when the proposals are discussed in Europe in October 2005.The consultation period closes on 21 September 2005 (CM 8 September).

Mirrors: The Department for Transport has issued a consultation document on the implementation of EU Directives which require additional blind-spot mirrors to be fitted to new goods vehicles and cars first used on or after 26 January 2007.