Anti-lock use and artic brakes 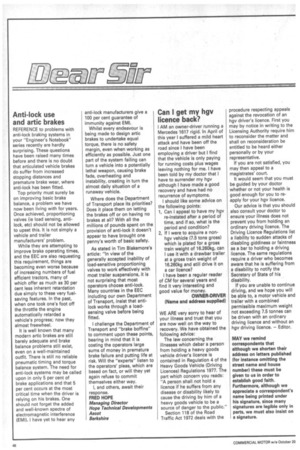 REFERENCE to problems with anti-lock braking systems in your "Engineer's Notebook" series recently are hardly surprising. These questions have been raised many times before and there is no doubt that articulated vehicle brakes do suffer from increased stopping distances and premature brake wear, where anti-lock has been fitted.

Top priority must surely be on improving basic brake balance, a problem we have now been living with for years. Once achieved, proportioning valves (ie load sensing, antilock, etc) should not be allowed to upset this. It is not simply a vehicle and trailer manufacturers' problem.

While they are attempting to improve brake operating times, and the EEC are also requesting this requirement, things are becoming even worse because of increasing numbers of fuel efficient tractors, many of which offer as much as 30 per cent less inherent retardation due simply to these very fuelsaving features. In the past, when one took one's foot off the throttle the engine automatically retarded a vehicle's progress; now they almost freewheel.

It is well known that many modern artic brakes are still barely adequate and brake balance problems still exist, even on a well-maintained outfit. There is still no reliable pneumatic timing and torque balance system. The need for anti-lock systems may be called upon in only 5 per cent of brake applications and that 5 per cent occurs at the most critical time when the driver is relying on his brakes. One should not forget the added and well-known spectre of electromagnetic interference (EM1). I have yet to hear any anti-lock manufacturers give a 100 per cent guarantee of immunity against EMI.

Whilst every endeavour is being made to design artic brakes to undertake equal torque, there is no safety margin, even when working as efficiently as possible. Just one part of the system failing can turn a vehicle into a potentially lethal weapon, causing brake fade, overheating and instability, creating in turn the almost daily situation of a runaway vehicle.

Where does the Department of Transport place its priorities? Does it place them on letting the brakes off or on having no brakes at all? With all the millions of pounds spent on the provision of anti-lock it doesn't appear to have brought one penny's worth of basic safety.

As stated in Tim Blakemore's article: "In view of the generally accepted inability of load-sensitive proportioning valves to work effectively with most trailer suspensions, it is not surprising that most operators choose anti-lock. Many countries in the EEC including our own Department of Transport, insist that antilock works through a loadsensing valve before being fitted.

I challenge the Department of Transport and "brake boffins" to comment upon these points, bearing in mind that it is costing the operators large sums of money in premature brake failure and putting life at risk. Will the "experts" listen to the operators' pleas, which are based on fact, or will they yet again refuse to commit themselves either way.

I, and others, await their response.