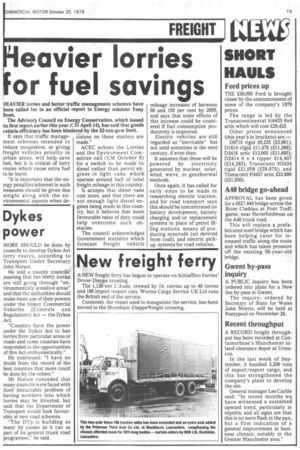 Page 21, 20th October 1978 — Dykes power
Close
Noticed an error?
If you've noticed an error in this article please click here to report it so we can fix it.
Keywords : Local Government In The United Kingdom, Dykes, Surnames, Horam, County Council, Lorry, Counties Of England, Environment

MORE SHOULD be done by councils to develop Dykes Act lorry routes, according to Transport Under Secretary John Horam.

He told a county councils' meeting that too many lorries are still going through "environmentally sensitive areas" and that the authorities should make more use of their powers under the Heavy Commercial Vehicles (Controls and Regulations) Act — the Dykes Act.

"Counties have the power under the Dykes Act to ban lorries from particular areas or roads and some counties have responded to the opportunities of this Act enthusiastically."

He continued: "I have no doubt from the record of the best counties that more could be done by the others."

Mr Horam conceded that many councils were faced with their intractable problem of having nowhere into which lorries may be diverted, but said that the Department of Transport would look favourably at new road schemes.

"The DTp is building as many by passes as it can as part of its general trunk road programme," he said.