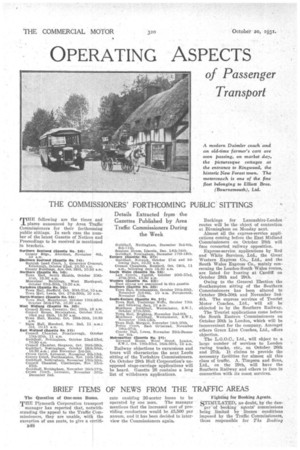 Page 66, 20th October 1931 — OPERATING ASPECTS
Close
Noticed an error?
If you've noticed an error in this article please click here to report it so we can fix it.
Keywords : Nottingham

Railway objections to excursions and tours will characterize the next Leeds sitting of the Yorkshire Commissioners. On October 29th Hull Corporation's unopposed stage-carriage applications will be heard. Gazette 26 contains a long list of 'withdrawn applications. Backings for Lancashire-London routes will be the object of contention at Birmingham on Monday next.

• Almost all the express-service applications coming before the East Midland Commissioners on October 28th will face concerted railway opposition.

Express-service applications by Red and White Services, Ltd., the Great Western Express Co., Ltd., and the

South Wales Express mainly concerning the London-South Co.,Wales routes, are listed for bearing at Cardiff on October 28th and 29th.

Owing to the General Election the Southampton sitting of the Southern Commissioners has been altered to October 29th-30th and November .3rd4th. The express services of Tourist hlotor Coaches, . Ltd., will all be objected to by the Southern Railway.

The Tourist applications come before the South Eastern Commissioners on October 30th in London, which will be inconvenient for the company. Amongst others Green Line Coaches, Ltd., offers objection.

The L.G.O.C., Ltd., will object to a large number of services to London racing tracks, etc., on October 26th and 27th. It claims to provide the necessary facilities for almost all this class of traffic. A. Timpson and Sons, Ltd., on the 29th, will have the Southern Railway and others to face in connection with its coast services.