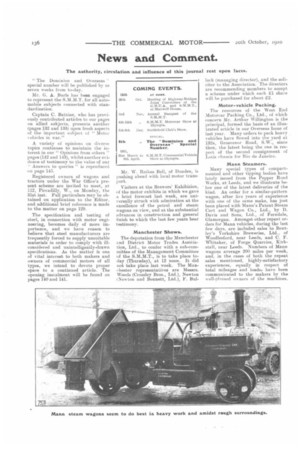 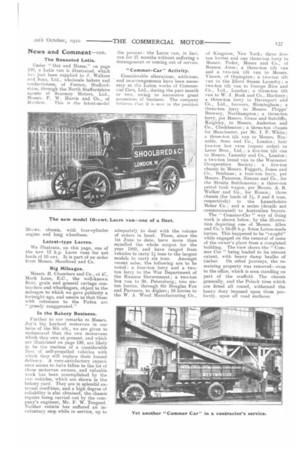 Page 8, 20th October 1910 — News and Comment.
Close
Noticed an error?
If you've noticed an error in this article please click here to report it so we can fix it.
Keywords : Steam Wagon, Truck, Ton, Commer, Landing Ship, Tank, Lorry

The authority, circuSation and influence of this journal rest upon facts.

"The Dominion and Overseas ' special number will be published by us seven weeks from to-day.

Mr. G. A. Burls has been engaged to represent the S.M.M.T. for all automobile subjects connected with standardization.

Captain C. Battine, who has previously -contributed articles to our pages on allied subjects, presents another (pages 132 and 133) upon fresh aspects of the important subject of " Motor vehicles in war."

A variety of opinions on diverse topics continues to maintain the interest in our " Opinions from others " pages (142 and 143), whilst another evidence of testimony to the value of our Answers to queries" is reproduced on page 145.

Registered owners of wagons and tractors under the War Office's present scheme are invited to meet, at 112, Piccadilly, W., on Monday, the 31st inst. Full particulars may be obtained on application to the Editor, and additional brief reference is made to the matter on page 129.

The specification and testing of steel, in connection with motor engineering, becomes daily of more importance, and we have reason to believe that steel manufacturers are frequently forced to supply unsuitable materials in order to comply with illconsidered and unintelligently-drawn specifications. As the matter is one of vital interest to both makers and owners of commercial motors of all types, we intend to devote proper space to a continued article. The opening instalment will be found on pages 140 and 141. Mr. W. Raikes Bell, of Dundee, is pushing ahead with local motor transport.

Visitors at the Brewers' Exhibition, of the motor exhibits in which we gave a brief forecast last week, are universally struck with admiration at the excellence of the petrol and steam wagons on view, and at the substantial advances in construction and general finish to which the last few years bear testimony.

The deputation from the Manchester and District Motor Trades Assebiation, Ltd., to confer with a sub-committee of the Management Committee of the S.M.M.T., is to take place today (Thursday), at 12 noon. It did not take place last week. The Manchester representatives are Messrs. Woods (Crossley Bros., Ltd.), Newton Newton and Bennett, Ltd.), F. Bul

lock (managing director), and the solicitor to the Association. The directors are recommending members to accept a scheme under which each El share will be purchased for about £2.

The resources of the West End Motorcar Packing Co., Ltd., of which concern Mr. Arthur Willington is the principal, formed the basis of an illustrated article in our Overseas Issue of last year. Many orders to pack heavy vehicles have flowed into the yard at 132a, Grosvenor Road, S.W., since then, the latest being the one in respect of the second consignment of Lotis chassis for Rio de Janeiro.

Many special types of compartmented and other tipping bodies have lately issued from the Pepper Road Works, at Leeds, and we illustrate below one of the latest deliveries of the kind. An order for a similar-pattern wagon, after five years of experience with one of the same make, has just been placed with Mann's Patent Steam Cart and Wagon Co., Ltd., by D. Davis and Sons, Ltd., of Ferndale, Glamorgan. Amongst other repeat orders for Mann vehicles, during the last few days, are included sales to Bentley's Yorkshire Breweries, Ltd., of W,00dlesferd, near Leeds, and C. F. Whitaker, of Forge Quarries, Kirkstall, near Leeds. Numbers of Mann wagons average 200 miles per week, and, in the cases of both the repeat sales mentioned, highly-satisfactory experiences, equally in respect of total mileages and loads). have been communicated to the makers by the well-plased owners of the machines. The Bonneted Lolls.

Under "Out and Home," on page 139, a Lotis van is illustrated, which has just been supplied to J. Walters and Sons, Ltd., wholesale bakers and confectioners, of Fenton, Staffordshire, through the North Staffordshire agents of Sturmey Motors, Ltd., Messrs. F. W. Harris and Co., of

Burslem. This is the latest-model 20-ewt. chassis, with four-cylinder engine and long wheelbase.

We illustrate, on this page, one of the new 12 h.p. Lacre vans for net loads of 10 cwt. It is part of an order from Messrs. Shoolbred and Co.

Messrs. R. Chambers and Co., of 47, Mark Lane, E.C., the well-known flour, grain and general cartage contractors and wharfingers, object to the mileages to which we gave publicity a fortnight ago, and assure us that those with reference to the Foclen are grossly exaggerated."

In the Bakery Business.

Further to our remarks re Messrs. Joy's big Leyland motorvan in our issue of the 8th ult., we are given to understand that the two motorvans which they own at present, and which are illustrated on page 139, are likely to be the nucleus of a considerable fleet of self-propelled vehicles with which they will replace their horsed delivery. A very-satisfactory experience seems to have fallen to the lot of these motorvan owners, and valuable

ork has been accomplished by the too vehicles, which are shown in the bakery yard. They are in splendid external condition, and a high degree of reliability is also obtained, the chassis repairs being carried out by the corn

. pa.ny's engineer, Mr. F. W. Toogood. Neither vehicle has suffered an involuntary stop while in service, up to the present: the Lacre van, in facu ran for 21 months without suffering a derangement or coming out of service.

Considerable alterations, additions, and re-arrangements have been necessary at the Luton works of Commercial Cars, Ltd., during the past month or two, owing to successive great accessions of business. The company ledieves Oat it is now in the position

The " Commer-Car " way of doing work is shown below, by the illustration depicting one of Messrs. Allen and Co.'s 24-26 h.p. 3-ton Luton-made lorries. This happened to be "caught" while engaged on the removal of some of the owner's plant from a completed building. The view shows the " Cornmer Car " being loaded to its utmost extent, with heavy damp baulks of timber. On other journeys, the remaining property was removed—even to the office, which is seen standing on part of the scaffold. The chassis generally, and the Polack tires which are fitted all round, withstand the heavy duty imposed upon them perfectly, upon all road surfaces.