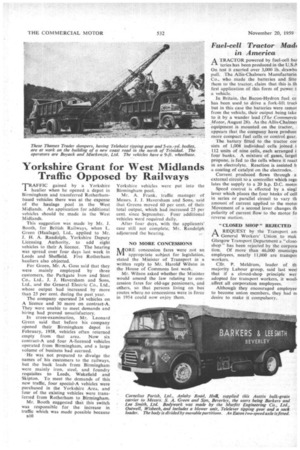 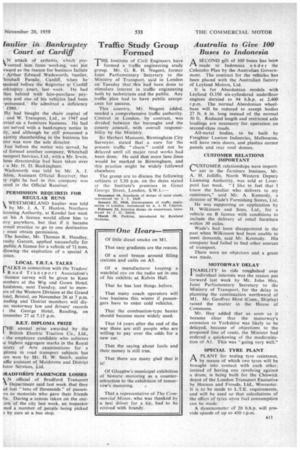 Page 44, 20th November 1959 — Yorkshire Grant for West Midlands Traffic Opposed by Railways
Close
Noticed an error?
If you've noticed an error in this article please click here to report it so we can fix it.
Keywords : Agricultural Machinery, Tractor, Birmingham, Motorway, Cardiff

This suggestion was made by Mr. J. Booth, for British Railways, when L. Green (Haulage), Ltd., applied to Mr. J. H. A. Randolph, Yorkshire Deputy Licensing Authority, to add eight vehicles to their A licence. The hearing was spread over four days last week in Leeds and Sheffield. Five Rotherham hauliers also objected.

For Green, Mr. A. Goss said that they were mainly employed by three customers, the Parkgate Iron and Steel Co., Ltd., J. J. Haversham and Sons, Ltd., and the General Electric Co., Ltd., whose output had. increased by more than 25 per cent, during the past year.

The company operated 24 vehicles on A licence and 30 more on contract-A. They were unable to meet demands and hiring had proved unsatisfactory.

In cross-examination, Mr. Leonard Green said that before his company opened their Birmingham depot in February, 1958, vehicles often returned empty from that area. Now six contract-A and four A-licensed vehicles operated from Birmingham, and a large volume of business had accrued.

• He was not prepared to divulge the names of his customers to the railways, but the back loads from Birmingham were mainly iron, steel, and foundry requisites to Leeds, Wakefield and Skipton. To meet the demands of this new traffic, four special-A vehicles were purchased in the Yorkshire Area, and four of the existing vehicles were transferred from Rotherham to Birmingham.

Mr. Booth suggested that this switch was responsible for the increase in traffic which was made possible because u10 Yorkshire vehicles were put into the Birmingham pool.

Mr. A. Frank, traffic manager of Messrs. J. J. Haversham and Sons, said that Greens moved 60 per cent, of their total output, which had increased 25 per cent. since September. Four additional vehicles were required daily.

After four days, with the applicants' case still not complete, Mr. Randolph adjourned the hearing.

MORE concession fares were not an appropriate subject for legislation, stated the Minister of Transport in a written reply to Mr. Harold' Wilson in the House of Commons last week.

Mr. Wilson asked whether the Minister would amend the law relating to con.: cession fares for old-age pensioners, and others, so that persons living on bus routes where no concessions were in force in 1954 could now enjoy them.

A TRACTOR powered by fuel-cell bat teries has been produced in the U.S.A On test it exerted over 3,000 lb. drawba pull. The Allis-Chalmers Manufacturin Co., who made the batteries and fitte, them to the tractor, claim that this is th first application of this form of power t a vehicle.

In Britain, the Bacon-Hydrox fuel cc has been used to drive a fork-lift truck but in this case the batteries were rernot from the vehicle, their output being take to it by a wander lead (The Commercic Motor, August 28). As the Allis-Chahnet equipment is mounted on the tractor, , appears that the company have produce more compact fuel cells or control gear.

The battery fitted to the tractor cor sists of 1,008 individual cells joined i 112 units of nine cells, each arranged i four banks. A mixture of gases, large' propane, is fed to the cells where it react in an electrolyte. Reaction is assisted b a coating of catalyst on the electrodes.

Current produced flows through a external circuit to a controller which regu lates the supply to a 20 h.p. D.C. motoi Speed control is effected by a singl lever which places the four banks of cell in series or parallel circuit to vary th amount of current applied to the motoi Movement of a second lever changes th polarity of current flow to the motor fo reverse motion.

"CLOSED SHOP" REJECTED A REQUEST by the Transport an I-A General Workers' Union to mak Glasgow Transport Department a "close, shop" has been rejected by the corpora Cori, Of more than 46,000 municipa employees, nearly 11,000 are transpor workers.

Although they encouraged employee to become union members, they had n4 desire to make it compulsory.

fanner in Bankruptcy Court at Cardiff

N attack of arthritis, which prevented him from working, was put rward as the reason for business failure r Arthur Edward Wadsworth, haulier, 'hi tehall Parade, Cardiff, when he

)peared before the Registrar at Cardiff inkruptcy court, lastweek. 1-le had lien, behind with hire-purchase payetas and one of his vehicles had been -possessed. He admitted a deficiency ' £980.

He had bought the share capital of . and W. Transport, Ltd., in 1947 and 'tried on a furniture business. He had :en served with a bankruptcy notice in ily, and although he still possessed a ajority shareholding in the business his ster was now the sole director.

Just before the notice was served, he id formed another company, Whitehall ransport Services, Ltd., with a Mr. Irwin, hose directorship had been taken over a Mr. H. D. Buckingham.

by Mr. J. A. T. Hanlon. Northern icensing Authority, at Kendal last week at his A licence would allow him to irry anywhere, but that if it becaMe armai practice to go to one destination ! must obtain permission.

rALKS in connection with the Traders' L Road Transport Association's '-licence survey will be given to Kent tembers at the Wig and Gown Hotel. laidstone, next Tuesday, and to memers of the Western Division at the Grand lotel, Bristol, on November 26 at 7 p.m. .eading and District members will .disJSS motorway law and drivers' records t the George Hotel, Reading, on lovember 27 at 7.15 p.m.

IRADFORD'S PASSENGER LOSSES \ N official of Bradford Transport Departmertt said last week. that they ad lost "tens of thousands" of passen:rs to motorists who gave their friends Its. During a census taken on the out:irts of the city last week, an inspector 3ted a number of people being picked a by cars at a bus stop.

THE Institute of Civil Engineers have formed a traffic engineering study group. Mr. G. R. H. Nugent, former Joint Parliamentary Secretary to the Ministry of Transport, said in London on Tuesday that this had been done to stimulate interest in traffic engineering both by technicians and the public. Any traffic plan had to have public acceptance for success.

This country, Mr. Nugent added, needed a comprehensive traffic authority. Control in London, by contrast, was divided between the boroughs and the county council, with overall responsibility by the Ministry.

Sir Herbert Manzoni, Birmingham City Surveyor, stated that a cure for the present traffic " chaos" could not be delayed until all major road works had been done. He said that more lane ,lines would be marked in Birmingham, and this practice might be widely followed elsewhere.

The group are to discuss the following subjects at 5.30 p.m. on the dates stated at the Institute's premises in Great George Street,. London, SW.!:—

January 21, 1960, Development of traffic engineering in London. introduced by A. J. H. Clayton.

Australia to Give 100 Buses to Indonesia

It is for Aberdonian models with Leyland 0.350 six-cylindered underfloor engines derated to 94 b.h.p. at 2,400 r.p.m. The normal Aberdonian wheelbase will be reduced to .accept bodies 27 ft. 6 in. long instead of the normal 30 ft. Redue.ed length and restricted axle loadings are necessary for operation on second-class roads.

All-metal bodies, to be built by Freighter Lawton Industries, Melbourne, will have twin doors, and plastics corner panels and rear roof domes, CUSTOMER RELATIONS IMPORTANT CUSTOMER relationships were import'.-' ant in the furniture .business, Mr. A. H. Jolliffe, North Western Deputy Licensing Authority, was told at Liverpool last week. "I like to feel that I know the haulier who delivers to my customers," said Mr. A. Kennedy, a director of Wade's Furnishing Stores, Ltd.

He was supporting an application by H. Wilkinson and Sons, Ltd., for a vehicle on B licence with conditions to include the delivery of retail furniture within 30 miles.

Wade's had been disappointed in the past when Wilkinson had been unable to meet demands, said Mr. Kennedy. His company had failed to find other sources of transport.

There were no objectors and a grant was made.

MOTORWAY DELAY TNABILITY to ride roughshod over I individual interests was the reason put forward last week by Mr. John Hay, Joint Parliamentary Secretary to the Ministry of Transport, for the delay in planning the continuation northward of Ml. Mr. Geoffrey Hirst (Cons., Shipley) raised the matter in the House of Commons.

Mr. Hay added that as soon as it became clear that the motorway's extension to Yorkshire was likely to be delayed, because of objections to the proposed line of route, the Minister had ordered a quickening of the modernization of Al. This was "going very well."

A PLANT for testing tyre resistance, by means of which two tyres will be brought into contact with each other, instead of having one revolving against a drum, is being built for the Chiswick depot of the London Transport Executive by Heenan and Fronde, Ltd., Worcester, It is to be made to L.T.E. requirements, and will be used so that calculations of the effect of tyres upon fuel consumption