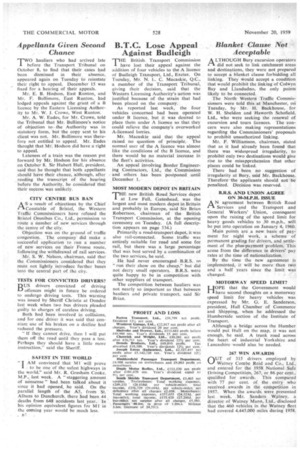 Page 38, 20th November 1959 — CITY CENTRE BUS BAN
Close
Noticed an error?
If you've noticed an error in this article please click here to report it so we can fix it.
Keywords :

A-S•a -result of objections by the Chief .rACoristable of Bristol, the Western Traffic Commissioners have refused the Bristol Omnibus Co., Ltd., permission to route a number of new services through the centre of the -city.

Objection was on the ground of traffic congestion.. The company did make a successful application to run a number of new services on their Frome route, following-the withdrawal of rail services.

Mr. S. W. Nelson, chairman, said that the Commissioners considered that they must not lightly introduce further buses into the central part of the city.