Looking Ahead in Mu ipal-motor Design 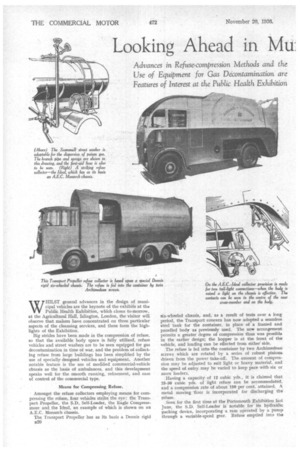 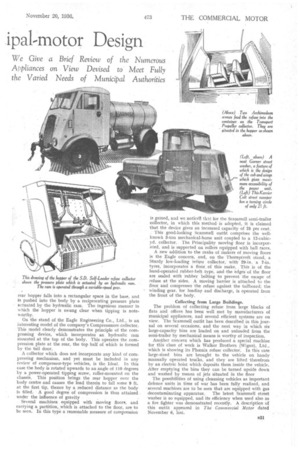 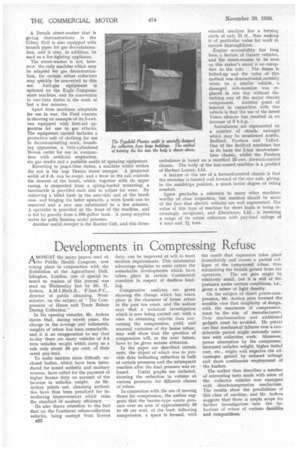 Page 34, 20th November 1936 — Looking Ahead in Mu ipal-motor Design
Close
Noticed an error?
If you've noticed an error in this article please click here to report it so we can fix it.

WHILST general advances in the design of municipal vehicles are the keynote of the exhibits at the Public Health Exhibition, which closes to-morrow, at the Agricultural Hall, Islington, London, the visitor will observe that makers have concentrated on three particular aspects of the cleansing services, and these form the highlights of the Exhibition.

Big strides have been made in the compression of refuse, so that the available body space is fully utilized, refuse vehicles and street washers are to be seen equipped for gas decontamination in time of war, and the problem of collecting refuse from large buildings has been simplified by the use of specially designed vehicles and equipment. Another notable feature is the use of modified commercial-vehicle chassis as the basis of ambulances, and this development speaks well for the smooth running, refinement, and ease of control of the commercial type.

Amongst the refuse collectors employing means for cornpressing the refuse, four vehicles strike the eye: the Transport Propeller, the SD. Self-Loader, the Eagle Compressmore and the Ideal, an example of which is shown on an A.E.C. Monarch chassis.

The Transport Propeller has as its basis a Dennis rigid B20 six-wheeled chassis, and, as a result of tests over a long period, the Transport concern has now adopted a seamless steel tank for the container, in place of a framed and panelled body as previously used. The new arrangement permits a greater degree of compression than was possible in the earlier design; the hopper is at the front of the vehicle, and loading can be effected from either side.

The refuse is fed into the container by two Archimedean screws which are rotated by a series of robust pinions. driven from the power take-off. The amount of compression may be adjusted to suit light or heavy material, and the speed of entry may be varied to keep pace with six or more loaders.

Having a capacity of 12 cubic yds., it is claimed that 25-30 cubic yds of light refuse can be accommodated, and a compression rate of about 150 per cent. attained. A metal moving floor is incorporated for discharging the refuse.

Seen for the first time at the Portsmouth Exhibition last June, the S.D. Self-Loader is notable for its hydraulic packing device, incorporating a ram operated by a pump through a variable-speed gear. Refuse emptied into the rear hopper falls into a rectangular space in the base, and is pushed into the body by a reciprocating pressure plate actuated by the hydraulic ram. The ingenious manner in which the hopper is swung clear when tipping is noteworthy.

On the stand of the Eagle Engineering Co., Ltd., is an interesting model of the company's Compressmore collector, This model clearly demonstrates the principle of the compressing device, which incorporates an hydraulic ram mounted at the top of the body. This operates the compression plate at the rear, the top half of which is formed by the tail door.

A collector which does not incorporate any kind of compressing mechanism, and yet must be included in any review of compressor-type vehicles, is the Ideal. In this case the body is rotated upwards to an angle of 110 degrees by a power-operated tipping screw, roller-mounted on the chassis. This position brings the rear hopper over the body centre and causes the load therein to fall some 9 ft. at the first tip, thence by a reduced distance as the body is filled, A good degree of compression is thus attained under the influence of gravity .

Several machines equipped with moving floors, and carrying a partition, which is attached to the floor, are to be seen. In this type a reasonable measure of compression

is gained, and we notice-8 that for the Searnmell semi-trailer collector, in which this method is adopted, it is claimed that the device gives an increased capacity of 25 per cent.

This good-looking Sca.mmell outfit comprises the wellknown 3-ton mechanical-horse unit coupled to a 12-cubicyd. collector. The Principality moving floor is incorporated, and is -supported on rollers equipped with ball races.

A new addition to the ranks of makers of moving floors is the Eagle concern, and, on the Thornycroft stand, a Sturdy low-loading 'refuse collector, with x 7-in, tyres, incorporates a floor, of this make. . This is of the hand-operated rubber-belt type, and-the edges of the floor are sealed with rubber belting to prevent the escape of refuse at the sides. A moving barrier is attached to the floor and compresses the refuse against the tailboard; the winding gear. for loadinp and discharge, is operated from the front of the body.

The problem of collecting refuse from large blocks of flats and offices has been well met by manufacturers of municipal appliances, and several efficient systems are on view. The Scammell outfit has been described in this journal on several occasions, and the neat way in which six large-capacity bins are loaded on and unloaded from the semi-trailer by mechanical means is worthy of inspection.

Another concern which has produced a special machine for this class of work is Walker Brothers {Wigan), Ltd., which is showing its Phcenix refuse collector. In this case large-sized bins are brought to the vehicle on handy manually operated trucis, and they are lifted 'therefrom by an electric hoist which deposits them inside the vehicle. After emptying the bins they can be turned upside down and washed by means of jets situated in the floor The possibilities of using cleansing vehicles as important defence units in time of war has been fully realized, and several machines are to be seen that are equipped with gas

decontaminating apparatus. The latest Scammell street washer is so equipped, and its efficiency when used also as a fire fighter was demonstrated recently. A description of this outfit appeared in The Commercial Motor dated November 6, last.

A Dennis street-washer that is giving demonstrations in the Gilbey Hall is also equipped with branch pipes for gas decontamination, and it may, in addition, be used as a fire-fighting appliance.

The street-washer is not, however, the only machine which may be adapted for gas decontamination, for certain refuse collectors may quickly be converted to this use. Anti-gas equipment is optional on the Eagle Compressmore machine, and its conversion to war-time duties is the work of but a few minutes.

apart from machines adaptable for use in war, the Ford concern is showing an example of its 5-cwt. van equipped with first-aid apparatus for use in gas attacks. The equipment carried includes a protective suit of clothing for use in decontaminating work, breathing apparatus, a twin-cylindered Novox outfit for use in conjunction with artificial respiration, six gas masks and a portable outfit 'of spraying equipment.

Reverting to peace-time duties, a machine which strikes the eye is the new Dennis street sweeper. A projected width of 6 ft. can be swept, and a lever in the cab controls the descent of the brush, which, together with its upper casing, is suspended from a spring-loaded mounting; a turnbuckle is provided each side to adjust for wear. By removing a blihd bush in the near-side end of the brush case, and hinging the latter upwards, a worn brush can be removed and a new one substituted in a few minutes, A sprinkler is provided at the front of the machine, and is fed by gravity from a 500-gallon tank. A pump supplies water for gully flushing under pressure.

Another useful sweeper is the Karrier Colt, and this three wheeled machine has a turning circle of only 21 ft., thus making it of particular value for work in narrow thoroughfares.

Engine accessibility has long been a feature of Garner vehicles, and the street-washer to be seen on this maker's stand is no exception to the rule. The frame is bolted-up and the value of this method was demonstrated recently when, on a similar vehicle, a damaged side-member was replaced in one day without disturbing any of the major chassis components. Another point of interest in connection with this vehicle is that the use of the latest Vokes silencer has resulted in an increase of 5 lo,h.p.

Ambulances are represented on a number of stands, amongst which may be mentioned Austin, Bedford, Fordson and Talbot. One of the Bedford machines has as its basis the 2-tan short-wheelbase chassis, whilst the Fordson ambulance is based on a modified 25-cwt. forward-control chassis. The body of the last-named machine is a product of Herbert Lomas, Ltd.

A feature of the use of a forward-control chassis is that the stretcher is located well forward of the rear axle, giving, in the amidships position, a much better degree of riding comfort.

Seace precludes a reference to many other machines worthy of close inspection, but mention should be made of the fact that electric vehicles are well represented. The value of this type of machine for short hauls is being increasingly recognized, and Electricars, Ltd., is featuring a range of its refuse collectors with pay-load ratings of 4 tons and 2i tons.