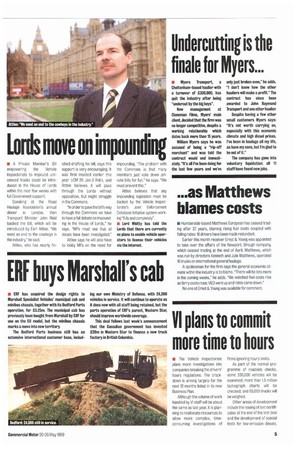 Page 7, 20th May 1999 — Lords move on impoundi
Close
Noticed an error?
If you've noticed an error in this article please click here to report it so we can fix it.
Keywords : Knights Of The Garter, Clement Attlee, Westminster System, Earl Attlee, Private Member's Bill, House Of Lords, Politics

• A Private Member's Bill empowering the Vehicle Inspectorate to impound unlicensed trucks could be introduced in the House of Lords within the next few weeks with full Government support.

Speaking at the Road Haulage Association's annual dinner in London, then Transport Minister John Reid backed the bill, which will be introduced by Earl Attlee. "We need an end to the cowboys in the industry," he said.

Attlee, who has nearly fin

ished drafting his bill, says this support is very encouraging. It was first mooted earlier this year (CM 28 Jan-3 Feb), and Attlee believes it will pass through the Lords without opposition. but might struggle in the Commons.

"In order to pave the bill's way through the Commons we have to have a full debate on impounding in the House of Lords," he says. "MPs must see that all issues have been investigated.'

Attlee says he will also have to lobby MPs on the need for impounding. "The problem with the Commons is that many members just vote down private bills for fun," he says, "We must prevent this."

Attlee believes that any impounding legislation must be backed by the Vehicle Inspectorate's Joint Enforcement Database Initiative system working "fully and completely".

Lord Whiny has told the Lords that there are currently no plans to enable vehicle operators to license their vehicles via the Internet.