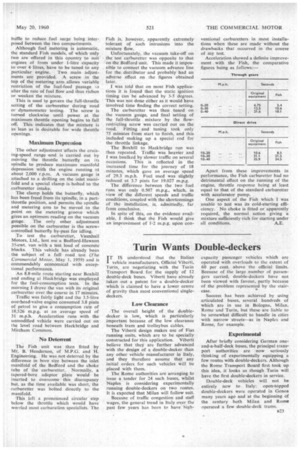 Page 57, 20th May 1960 — Turin Wants Double-deckers
Close
Noticed an error?
If you've noticed an error in this article please click here to report it so we can fix it.

I T IS understood that the Italian vehicle manufacturers, Officini Viberti, Turin, are negotiating with the Turin Transport Board for the supply of 12 double-deck buses. Viberti have already taken out a patent for a double-decker, which is claimed to have a lower centre of gravity than most conventional singledeckers.

.The overall height of the doubledecker is low, which is particularly important because of the low clearance beneath tram and trolleybus cables.

The Viberti design makes use of Fiat running units, which are to be specially constructed for this application. Viberti believe that they are further advanced with the design of a double-decker than any other vehicle manufacturer in Italy, and they therefore assume that any initial orders for such vehicles will be placed with them.

The Rome authorities are arranging to issue a tender for 24 such buses, whilst Naples is considering experimentally running double-deckers on two routes. It is expected that Milan will follow suit.

Because of traffic congestion and staff wages, the general trend in Italy over the past few years has been to have high capacity passenger vehicles which are operated with overloads to the extent of 60 per cent. above the official limits. Because of the large number of passengers carried, double-deckers have not been viewed with favour, partly because of the problem represented by the staircase.

Success has been achieved by using articulated buses, several hundreds of which are in use in Bologna, Milan, Rome and Turin, but these are liable to be somewhat difficult to handle in cities with narrow streets—as in Naples and Rome, for example.

After briefly considering German oneand-a-half-deck buses, the principal transport authorities are now seriously thinking of experimentally equipping a few routes with double-deckers. Although the Rome Transport Board first took up this idea, it looks as though Turin will have the first double-deckers in service.

Double-deck vehicles will not be entirely new to Italy: open-topped double-deckers were operated in Genoa many years ago and at the beginning of the century both Milan and Rome operated a few double-deck trams.