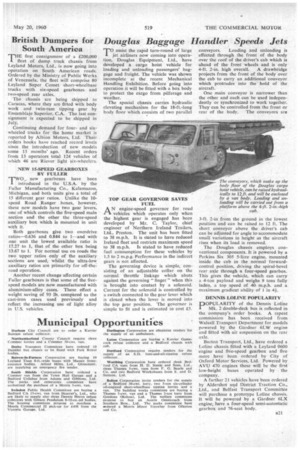 Page 55, 20th May 1960 — Douglas Baggage Handler Speeds Jets
Close
Noticed an error?
If you've noticed an error in this article please click here to report it so we can fix it.
Keywords :

TO assist the rapid turn-round of large 1 jet airliners now coming into operation, Douglas Equipment, Ltd., have developed a cargo hoist vehicle for loading and unloading passengers' baggage and freight. The vehicle was shown incomplete at the recent Mechanical Handling Exhibition. Before going into operation it will be fitted with a box body to protect the cargo from pilferage and weather. The special chassis carries hydraulic elevating mechanism for the 18-ft.-long body floor which consists of two parallel

N engine-speed governor for road PA vehicles which operates only when the highest gear is engaged has been developed by Mr. C. Taylor, chief engineer of Northern Ireland Trailers, Ltd., Preston. The unit has been fitted to 38 m.p.h. It is stated to have reduced Ireland fleet and restricts maximum speed to 38 m.p.h. Is stated to have reduced fuel consumption for these vehicles by 1.5 to 2 m.p.g. Performance in the indirect gears is not affected. The governing device is simple, consisting of art adjustable collar on the normal throttle linkage which abuts against the governing "finger" " when this is brought into contact by a solenoid. Current for the solenoid is controlled by a switch connected to the gear lever which is closed when the lever is moved into the top gear position. The governor is simple to fit and is estimated to cost £5. conveyors. Loading and unloading is effected through the front of the body roof over the of of the driver's cab which is ahead of the front wheels and is only 4-ft. 2-in, high overall. A drawbridge projects from the front of the body over the cab to carry an additional conveyor which protrudes into the hold of the aircraft. One main conveyor is narrower than the other and each can be used independently or synchronized to work together. They can be controlled from the front or

rear of the body. The conveyors are

3-ft. 2-in from the ground in the lowest position and can be raised to 12 ft. The short conveyor above the driver's cab can be adjusted for angle to accommodate small variations in height as the aircraft rises when its load is removed. The Douglas chassis employs conventional components. It is powered by a Perkins Six 305 5-litre engine, mounted inside the cab in the normal forwardcontrol position, driving the spiral-bevel rear axle through ft four-speed gearbox. This gives the vehicle, which can carry tons a 4-ton payload and weighs 9 to fully laden, a top speed of 40 m.p.h. and a maximum gradient ability of 1 in 4+.

PPULARITY of the Dennis Loline Mk. 2 double-deck bus is reflected in the company's order books. A repeat commission has been received from Walsall Transport Department for models powered by the Gardner 6LW engine and fitted with air suspension on the rear axle. Barton Transport, Ltd., have ordered a Loline chassis fitted with a Leyland 0600 engine and five-speed gearbox and five more have been ordered by City of Oxford Motor Services, Ltd. Powered by AVU 470 engines these will be the first low-height buses operated by the company. A further 21 vehicles have been ordered by Aldershot and District Traction Co., .Ltd., and Belfast Transport Committee will purchase a prototype Loline chassis. It will be powered by a Gardner 6LX engine, have a four-speed semi-automatic gearbox and 76-scat body.