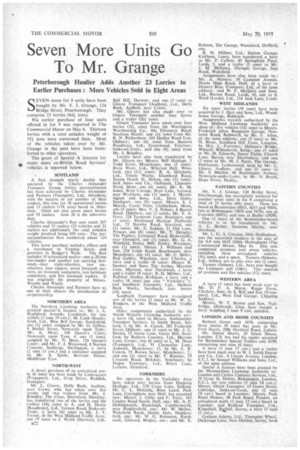 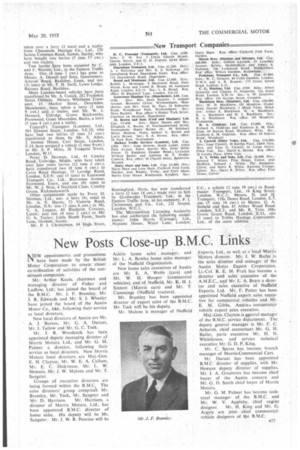 Page 48, 20th May 1955 — Seven More Units Go To Mr. Grange
Close
Noticed an error?
If you've noticed an error in this article please click here to report it so we can fix it.
Keywords : Truck, Articulated Vehicle, Haulage, Landing Ship, Tank

His earlier purchase of four units offered in list 9 was reported in The Commercial Motor on May 6. Thirteen lorries with a total unladen weight of 351 tons were concerned then. Most of the vehicles taken over by Mr. Grange in the past have been transferred to other operators.

The grant of Special A licences for

0 many more ex-British Road Sconces' vehicles is reported below.

• SCOTLAND A fleet strength nearly double that operated by the Charles . Alexander transport Group before nationalization has been achieved by Charles Alexander and Partners (Transport), Ltd., Aberdeen, with the success of yet another of their tenders, this time for 38 operational lorries and 13 trailers (176 tons) based in Aberdeen. There are also seven spare lorries and 18 trailers. June 20 is the take-over date.

Charles Alexander and Partners have as one of their objects the introduction of co-partnersh:p.

, NORTH-WEST A direct purchase of an articulated outfit (6 tons) has been made by Contractors (Transport), Ltd., Greg Street, Reddish, Stockport.

Mr. L. Cleave, Holly Bank, Audlem, near Crewe, who has taken over five lorries and two trailers from Mr. J. Brindley, The Close, Sharnford, Hinckley, has transferred two of the lorries and the trailers (141 tons) to A. and H. Davey (Roadways), Ltd., Vernon Road, Stoke-onTrent; a lorry (42 tons) to Mr. J. -T. Trevor, in the West Midland Traffic Area; one (s tons) to J. Walsh (Darwen), Ltd.,

Mr. Gleave has also made over to Gleave Transport another four lorries and a trailer (201 tons).

Spencer and Sons, The Arches, Marston Lane, Marston, near Northwich. a lorry and a trailer (8 tons); R. H. /ginner. Ltd.,

Sandhach Transport have re-assigned one of the lorries (3 tons) to Mr. W. A. Rodgers, in the West Midland Traffic Area.

Mr. L. G. A. Cousins, Sible Hedingham, was the successful tenderer in the case of list S.4 unit 6632 (Sible Hedingharn) (The Commercial Motor, May 6). This unit comprised premises and seven vehicles, including three articulated vehicles (161 tons), and a spare. Turners (Soham), Ltd.. Soham, are to take over one (2 tons).

Buntingford, Herts, has now transferred a lorry (2 tons 18 cwt.) made over to him by Griniwades Transpoit, Ltd., in the Eastern Traffic Area, to his company, P. I. Christensen and Co., Ltd., 231 Strand, London. W.C.2.