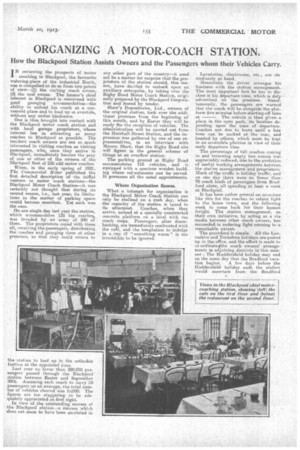 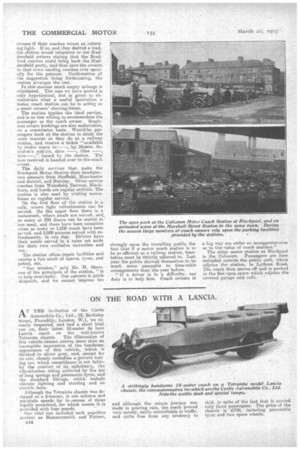 Page 35, 20th March 1923 — ORGANIZING A MOTOR-COACH STATION.
Close
Noticed an error?
If you've noticed an error in this article please click here to report it so we can fix it.
Keywords : Blackpool, Bus

How the Blackpool Station Assists Owners and the Passengers, whom their Vehicles Carry.

I N reviewing the prospects of motor coaching in Bla,ckpool, the favourite watering-place of the industrial North, one is compelled to do so from two points of view—(1) the visiting coach owner, 2) the °cal owner. The fornaer's claief interest in Blackpool is concerned with good garaging accommodation—the ability to unload his cbach at a convenient place and to load up at eventide, without any undue hindrance. One is thus brought into contact with the Blackpool motor coach station and with local garage proprietors, Whose interest lies in attracting as many coaches to Blackpool as possible. The resident coach owners are not so much interested in visiting coaches as visiting passengers, who once they arrive in 131ackpool, imnteaiately become the prey of one or other of the owners of the Blackpool fleet of 250 odd motor coaches.

When, in the early spring of 1921, The Commercial Motor published the first detailed description a the inifial venture in motor coach etations—the Blackpool Motor Coach Station—it was certainly not thought. that during its second season, i.e., last year, its limitations in the matter of parking space would become manifest.. Yet such was the ease.

On one single day last year the station, which accommodates 135 big coaches, was . invaded by an army of 240 of them. The proprietors coped with them all, receiving the passengers, distributing the coaches and garaging them at other premises, so that they could rettirn to the station to load up in the orthodox fashion at the appointed time.

Last year no fewer than 200,000 passengers passed through the Blackpool station between Easter and September . 30th. Assuming each coach to carry 20 passengers on an average, the total number of vehicles cleared was 10,000. The figures are too staggering to be adequately appreciatect.at first sight.

In view of the outstanding success of the Blackpool station—a success which does not seem to have been mulated in any other part of the country—it need not be a matter for surprise that the proprietors of the station should, this season, have &aided to embark upon an auxiliary enterprise, by taking over the Rigby Road Motor Coach Station, originally prepared by the Blackpool Corporation and 'leased by tender. Shaw's Depositories, Ltd., owners of the original station, took over the additional premises from the beginning of this month, and by Easter they will be ready fur the reception of vehicles. The administration will be carried out from the Marshall Street Station, and the impression was gathered by one of our, representatives, in an interview with Messrs. Shaw, that the Rigby Road site will figure in the general scheme of things as an overflow station.

The parking ground at Rigby Road accommodates 115 vehicles, and is equipped with a spacious wooden building where refreshments can be served. It possesses all the usual appointments.

What. a triumph for organization is the Blackpool Motor Coach Station can only be realized on a rush day, when the capacity of the station is taxed to its uttermost. Coaches, -when they arrive, unload at a specially constructed concrete platform on a level with the coach steps. Passengers, after disembarking, are immediately confronted with the cafe, and the temptation to indulge in a cup cif " something warm" is too irresistible to be ignored. • Lavatories, cloakrooms, etc., are ira' mediately at hand.

Meanwhile the driver arranges his business with the station management. The most important fact he has to disclose is his departure time, which is duly — advertised on the premises. Simultaneously, the passengers are warned that the coach till be alongside the platform five minutes before starting-off time at . The vehicle is then given a place in the open park, it location depending upon the time of departure. Coaches not due to leave until a late hour can be parked at the rear, and fronted by others, which must be kept in an accessible p6sition in view of their early departure time.

The percentage of full coaches coming in and returning empty last season was appreciably redueed, due to the evolution of useful working arrangements.between the station management and proprietors. Much of the traffic is holiday traffic, and on one day there were no fewer than 70 coach loads of passengers from Bradford alone, all spending at. least a week at Blackpool. It has been rather general on OCkIll' ions like this for the coaches to return fight to the home town: and the following week to come back for their human freight. The station management, on their own initiative, by acting as a via media between other coach owners, has succeeded in reducing light running to a remarkable extent.

In this manlier much empty mileage is eliminated. The case we have quoted is only hypothetical, but is given to demonstrate what a useful institution a motor coach station can be in acting' as a coach owners' clearing-house.

The station typifies the ideal service, and is no less willing to accommodate the passenger as the coach owner. Single. seat return bookings are also undertaken, ,311 a commission basis. Would-be passengers book at the station in much the same manner as they do at a. railway station, and receive a ticket "available by motor coach to -----, by Messrs. Soand-so's vehicle, date —, time

fare—,"' issued by the station. The fare received is handed over to the coach owner.

The daily services that make the Blackpool Motor Station their headqua,..tens emanate from Sheffield, Manchester and district, and Burnley. Other service coaches from Wakefield; Damen, Blackburn, and Leeds are regular arrivals. The station is also used by visiting motorbuses on regular service. On the first floor of the station is a cafe, where light refreshments can be served. On the upper floor there is a restaurant, where meals are served, and., as many as 250 diners can be seated at one meal, and there have been occasions when as many as 1,004 meals have been served, and 5,000 persons served with refreshments, 'in one day. Drivers have their meals served in a room sat aside for their own exclusive recreation and The station offers -repair facilities and carries a fair stock of spares, tyres, and petrol, etc.

"Our mission," said Mr. H. Shaw, one of the principals of the station, " is to help everybody. Our concern is quick despatch, and we cannot impress too strongly upon the travelling public the fact that if a. motor coach station is to be as efficient as a railway station, timetables must be strictly adhered to. Last year the public showed themselves to be much more amenable to time-table arrangements than the year before. "If a driver is in a difficulty, our duty is to help him. Coach Owners in a big way are under no misapprehension as to the-value of coach stations." • The other motor station at Blackpool is the Coliseum. Passengers are here unloaded outside the public café, which adjoins the station, in Lytham Road. The coach then moves off and is parked in the fine open space which adjoins the covered garage and café. '