POSSIBILITIES OF THE PASSENGER TRAILER, • 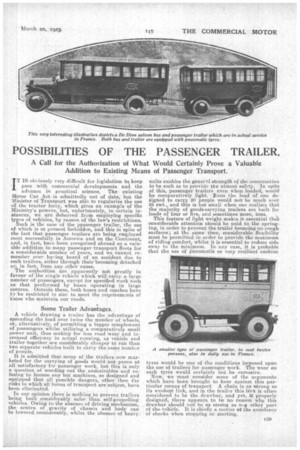 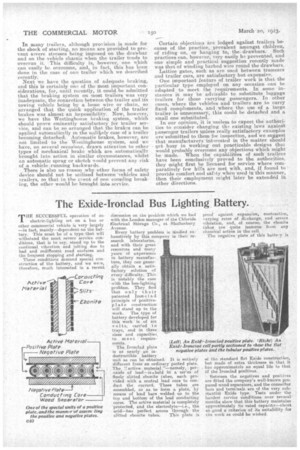 Page 31, 20th March 1923 — POSSIBILITIES OF THE PASSENGER TRAILER, •
Close
Noticed an error?
If you've noticed an error in this article please click here to report it so we can fix it.

A Call for the Authorization of What Would Certainly Prove a Valuable Addition to Existing Means of Passenger Transport.

IT IS obviously very .difficult for legislation to keep pace with commercial developments and the advance in practical science. The existing Motor Car Act is admittedly out of date, but the Minister of Transport was able to regularize the use tif the tractor lorry, which gives an example of the

bu Ministry's powers, t, unfortunately, in certain in stances, we are debarred from employing specific types of vehicles, by reason of the law's restrictions. Such is the case of the passenger trailer, the use of which is at present forbidden, and this in spite of the fact that passenger trailers are being employed most successfully, in America and on the Continent., and, in fact, have been recognized abroad as a valualle addition to many passenger transport fleets for a considerable number of years, and we cannot remember ever having heard of an accident due to such trailers, either through their becoming detached or, in fact, from any other cause. The authorities are apparently not greatly in favour of the single vehicle which will carry a large number of passengers, except for specified work such .as that performed by buses operating in large centres. Outside these, both buses and coaches have ta be restricted in size to meet the requirements of those who maintain our roads.

A vehicle drawing a trailer has the advantage of spreading the load over twice the number of wheels, or, alternatively, of permitting a bigger complement of passengers whilst utilizing a comparatively small power unit, thus making for less road wear and increased efficiency in actual running, as vehicle and traileret.ogether are considerably cheaper to run than two separate vehicles built to carry the same number of people.

It is admitted that many of the trailers now marketed for the carrying of goads would not prove at all satisfactory for passenger work, but this is only a question of weeding out the undesirables and refusing to license any but. machines, so designed and equipped that all possible dangers, other than tbe risks to which all forms of transport are subject, have been eliminated.

In our opinion there is nothing to prevent trailers being built considerably safer than self-propelling vehicles. 0Wing'to-the absence of driving mechanism, the centre of gravity of chassis and body can be lowered considerably, whilst the absence of heavy.

units enables the general strength of the construction to be such as to prbvide t.le Utmost safety. In spite of this, passenger trailers even when loaded, would be comparatively light. even the load of one designed to carry '20 people would note be much over .25 cwt., and this is but small when one realizes that the majority of goods-carrying trailers are built for loads of four or five, and sometimes more, tons.

This feature of light weight makes it essential tha't considerable attention should be paid to. the springing, in order to prevent the trailer bouncing on rough surfaces; at the same time, considerable flexibility must be permitted in order to provide the maiimum of riding.comfort: whilst it is essential to reduce side sway to the minipram. In any case, it is probable that the use of Pneumatic or very resilient cushion

tyres would be one of the conditions imposed upon the use of trailers for passenger work. The wear on such tyres would certainly not be excessive.

Now, we -must consider some of the arguments which have been brought to bear against this particular means of transport. A chain is as 'strong as Its weakest link, and in the trailer this lint is often considered to be the drawbar, and yet, If properly deSignedi there appears to be no reason why this drawbar should not be as strong as any other part of th.e-Vehiele. It is chiefly a matter of the avoidance of shocks when stopping or starting. In many trailers, although provision is made for the shock of starting, no means are provided to prevent severe stresses .beingimposed on the drawbar and on the vehicle chassis when the trailer tends to overrun it. This difficulty is, however, one which can easily be overcome, and, in fact, this has been done in the case of one trailer which we described recently.

Next we have the question of adequate braking, and this is certainly one of the most important considerations, for, until recently, it could be admitted that the braking System on most trailers was very inadequate, the connection between-the trailer and its towing vehicle being by a loose wire or chain, so. arranged that the quick application of the trailer brakes was almost an impossibility. Now, however, we have the Westinghouse braking system, which shmild prove eminently satisfactory for trailer service, and can be so arranged that the brakes can be applied automatically in the unlikely case of a trailer becoming detached. Automatic brakes, however, are not limited to the Westinghouse system, arid we have, on .several occasions, drawn attention to other types of mechanical brake which are -automatieallv brought into action in similar circumstances, whilst an automatic sprag or sketch would prevent any risk of .a vehicle .running backwards.

There is also no .reason why. other forms of safety device should not be utilized between 'vehicles and trailers, so that in the cvent of one coupling breaking, the other would be brought into service. Certain objections are lodged against trailers because of the practice, prevalent amongst children, of riding on, or hanging to, the-drawbars.Such practices can, however, very easily be prevented, and one simple and practical suggestion recently made was that of winding barbed wire round the drawbars.

Lattice gates, such as are used between tramcars and trailer cars, are satisfactory but expensive.

One important feature of trailer work is that the particular type employed on any occasion _can be adapted to meet the requirements. In some instances it may be advisable to substitute luggage trailers for those carrying passengers. In other eases, where the vehicles and trailers are to carry fixed complements, and .where the use of a large trailer is unnecessary, this could be detached and a small one substituted.

In our opinion, it is useless to expect the authorities to. consider changing the existing laws against passenger trailers unless really satisfactory examples are'submitted to them for inspection, and we suggest that manufacturers 'interested in the matter should get busy in working out practicable designs that would probably overcome any objections which might: be made. When the capabilities Of such trailers have been conclusively proved to the authorities, they might first be licensed for service where comparatively few hills are met with, and, if found to• provide comfort and safety when used in this manner, then their employment might later be extended in other directions.