• For the past five years the European truck manufacturers 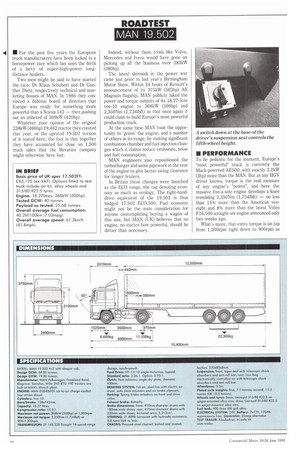 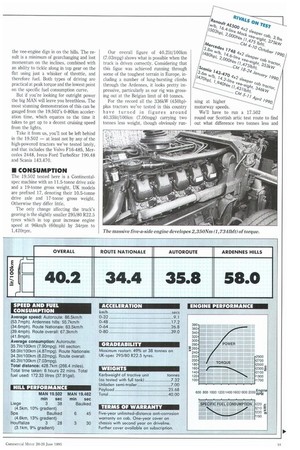 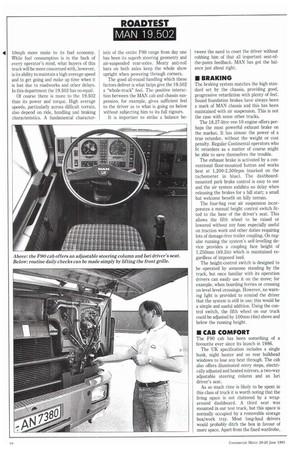 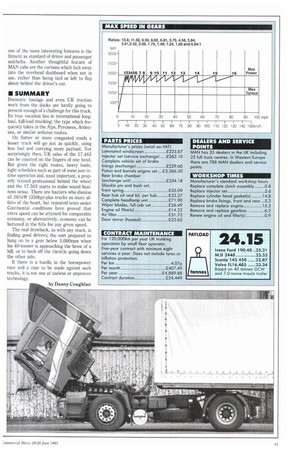 Page 32, 20th June 1991 — • For the past five years the European truck manufacturers
Close
Noticed an error?
If you've noticed an error in this article please click here to report it so we can fix it.
Keywords : Truck, Pickup Trucks, Dump Truck, Scania, Straight-six Engine, Volvo Fh, Volvo Fe

have been locked in a horsepower race which has seen the birth of a bevy of super-high-power longdistance haulers.

Two men might be said to have started the race: Dr Klaus Schubert and Dr Gunther Dietz, respectively technical and marketing bosses of MAN. In 1986 they convinced a dubious board of directors that Europe was ready for something more powerful than a Scania 142 — then pushing out an unheard of 309kW (420hp).

Whatever your opinion of the original 338kW (460hp) 19.462 tractor they created that year, or the uprated 19.502 version of it tested here, the fact is that together they have accounted for close on 1,500 truck sales that the Bavarian company might otherwise have lost. Indeed, without them rivals like Volvo, Mercedes and Iveco would have gone on picking up all the business over 283kW (380hp).

The latest skirmish in the power war came just prior to last year's Birmingham Motor Show. Within 24 hours of Renault's announcement of its 375kW (503hp) AE Magnum flagship, MAN publicly hiked the power and torque outputs of its 18.27-litre vee-10 engine to 368kW (500hp) and 2,350Nm (1,7341bft) so that once again it could claim to build Europe's most powerful production truck.

At the same time MAN took the opportunity to 'green' the engine, and a number of others in its range, by making significant combustion chamber and fuel injection changes which it claims reduce emissions, noise and fuel consumption.

MAN engineers also repositioned the turbocharger and some pipework at the rear of the engine to give better swing clearance for longer trailers.

In Britain these changes were launched as the ECO range, the tag denoting economy as much as ecology. The right-handdrive equivalent of the 19.502 is thus badged 17.502 EC0.500. Fuel economy might not be the main consideration for anyone contemplating buying a wagon of this size, but MAN (UK) believes that no engine, no matter how powerful, should be dirtier than necessary.

To be pedantic for the moment, Europe's "most powerful" truck is currently the Mack-powered AE500, with exactly 2.2kW (3hp) more than the MAN. But as any HGV driver knows, torque is the real measure of any engine's "power", and here the massive five-a-side engine develops a knee trembling 2,350Nm (1,7341bft) — no less than 15% more than the American veeeight and 8% more than the latest Volvo F16.500 straight-six engine announced only two weeks ago.

What's more, that extra torque is on tap from 1,300rpm right down to 900rpm as the vee-engine digs in on the hills. The result is a minimum of gearchanging and lost momentum on the inclines, combined with an ability to tickle along in top gear on the flat using just a whisker of throttle, and therefore fuel. Both types of driving are practical at peak torque and the lowest point on the specific fuel consumption curve.

But if you're looking for outright power the big MAN will leave you breathless. The most stunning demonstration of this can be gauged from the 19.502's 0-80km acceleration time, which equates to the time it takes to get up to a decent cruising speed from the lights.

The only change affecting the truck's gearing is the slightly smaller 295/80 R22.5 tyres which in top gear increase engine speed at 96km/h (60mph) by 34rpm to 1,42Orpm. Our overall figure of 40.2lit/100km (7.03mpg) shows what is possible when the truck is driven correctly. Considering that this figue was achieved running through some of the toughest terrain in Europe, including a number of lung-bursting climbs through the Ardennes, it looks pretty impressive, particularly as our rig was grossing out at the Belgian limit of 40 tonnes.

For the record all the 336kW (450hp)plus tractors we've tested in this country have turned in figures around 40.35Iit/100km (7.00mpg) carrying two tonnes less weight, though obviously run lOmph more make to its fuel economy. While fuel consumption is in the back of every operator's mind, what buyers of this truck will be more concerned with, however, is its ability to maintain a high average speed and to get going and make up time when it is lost due to roadworks and other delays. In this department the 19.502 has no equal.

Of course there is more to the 19.502 than its power and torque. High average speeds, particularly across difficult terrain, also depend on ride, handling and braking characteristics. A fundamental character istic of the entire F90 range from day one has been its superb steering geometry and air-suspended rear-axles. Meaty anti-roll bars on both axles keep the whole show upright when powering through corners.

The good all-round handling which these factors deliver is what helps give the 19.502 a "whole-truck" feel. The positive interaction between the MAN cab and chassis suspension, for example, gives sufficient feel to the driver as to what is going on below without subjecting him to its full rigours.

It is important to strike a balance be tween the need to coset the driver without robbing him of that all important seat-ofthe-pants feedback. MAN has got the balance just about right.

The braking system matches the high standard set by the chassis, providing good, progressive retardation with plenty of feel. Sound foundation brakes have always been a mark of MAN chassis and this has been maintained with air suspension. This is not the case with some other trucks.

The 18.27-litre vee-10 engine offers perhaps the most powerful exhaust brake on the market. It has almost the power of a true retarder, without the weight or cost penalty. Regular Continental operators who fit retarders as a matter of course might be able to save themselves the trouble.

The exhaust brake is activated by a conventional floor-mounted button and works best at 1,200-2,300rpm (marked on the tachometer in blue). The dashboardmounted park brake control is easy to use and the air system exhibits no delay when releasing the brakes for a hill start; a small but welcome benefit on hilly terrain.

The four-bag rear air suspension incorporates a manual height control switch fitted to the base of the driver's seat. This allows the fifth wheel to be raised or lowered without any fuss; especially useful on traction work and other duties requiring lots of damage-free trailer coupling. On regular running the system's self-levelling device provides a coupling face height of 1,250mm (49.2in) which is maintained regardless of imposed load.

The height-control switch is designed to be operated by someone standing by the truck, but once familiar with its operation drivers can easily use it on the move; for example, when boarding ferries or crossing un-level level crossings. However, no warning light is provided to remind the driver that the system is still in use; this would be a simple and useful addition. Using the control switch, the fifth wheel on our truck could be adjusted by 100mm (4in) above and below the running height.

The F90 cab has been something of a favourite ever since its launch in 1986.

As so much time is likely to be spent in this class of truck it is worth noting that the living space is not cluttered by a wraparound dashboard. A third seat was mounted in our test truck, but this space is normally occupied by a removable storage box/work tray. Most long-haul drivers would probably ditch the box in favour of more space. Apart from the fixed wardrobe, one of the more interesting features is the fitment as standard of driver and passenger seatbelts. Another thoughtful feature of MAN cabs are the curtains which lock away into the overhead dashboard when not in use, rather than being tied or left to flap about behind the driver's ear.

Domestic haulage and even UK traction work from the docks are hardly going to present enough of a challenge for this truck. Its true vocation lies in international longhaul, full-load trucking; the type which frequently takes in the Alps, Pyrenees, Ardennes, or similar arduous routes.

On flatter or more congested roads a lesser truck will go just as quickly, using less fuel and carrying more payload. Not surprisingly then, UK sales of the 17.462 can be counted on the fingers of one hand. But given the right routes, heavy loads, tight schedules such as part of some just-intime operation and, most important, a properly trained professional behind the wheel and the 17.502 starts to make sound business sense. There are hauliers who dismiss all 261kW (350hp)-plus trucks as mere affairs of the heart, but repeated tests under Continental conditions have proved that extra speed can be attained for comparable economy, or alternatively, economy can be bettered in the hills for any given speed.

The real drawback, as with any truck, is finding good drivers; the sort prepared to hang on to a gear below 1,000rpm when his 40-tonner is approaching the brow of a hill, or to back off the throttle going down the other side.

If there is a hurdle in the horsepower race and a case to be made against such trucks, it is not one of useless or unproven technology.