THE COLLAPSE OF THE RAILWAYS BILL. 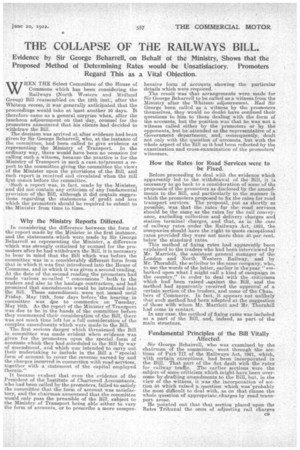 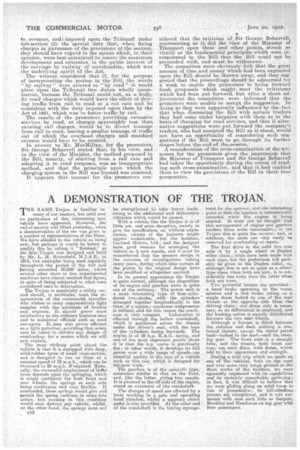 Page 9, 20th June 1922 — THE COLLAPSE OF THE RAILWAYS BILL.
Close
Noticed an error?
If you've noticed an error in this article please click here to report it so we can fix it.
Keywords : James Madison, Presidency Of George Washington, United States Bill Of Rights, United States Constitution

Evidence by Sir George Beharrell, on Behalf of the Ministry, Shows that the Proposed Method of Determining Rates would be Unsatisfactory. Promoters Regard This as a Vital Objection.

WHEN THE Select Committee of the House of Commons which has been considering the Railways (North Western and Midland Group) Bill reassembled on the 12th inst., after the Whitsun recess, it was generally anticipated, that the proceedings would take at least another 10 days. It therefore came as a general surprise when, after the luncheon adjournment on that day, counsel for the promoters announced that his clients had decided to withdraw the Bill.

The decision was arrived at after evidence had been given by Sir George Beharrell, who, at the instance of the, committee, had been called to give evidence as representing the Ministry of Transport. In the ordinary way, there would have been no occasion for calling such a witness, because the practice is forthe Ministry of Transport in such a case to present a report to the committee giving the committee the views • of the Minister upon the provisions of the Bill, and such report is received and circulated when the hill first comea before the committee.

}Such a report was, in fact, made by the Minister, and did not contain any criticism of any fundamental provision of .the Bill, although it did contain suggesgone regarding the statements of profit and loss which the promoters should be required to submit to the Minister from time to time.

Why the Ministry Reports Differed.

In considering the difference between the form of the report made by the Minister in the first instance, and the statements-which were made by Sir George Beharrell as representing the Minister, a difference which was strongly criticised by counsel for the promoters after he had withdrawn the Bill, it is necessary to bear in mind that the Bill which was before the committee was in a considerably different form from that in which it was first introduced into the House of Commons, and in which it was given a second reading. At the date of the second reading the promoters had made various so-called " concessions" both to the traders and also to the haulage contractors, and had promised that amendments would be introduced into the Bill. These amendments were not issued until Friday. May 12th, four days before *the hearing; in committee was d,ue to commertce on Tuesday, May 16th. As the report of the Minister of Transport was due to be in the hands of the committee before they commenced their consideration of the Bill, there was not much time left for a full consideration of the complex amendments which were made to the Bill.

The first serious danger which threatened the Bill in committee was made evident when evidence was given for the promoters upon the special form of accounts which they had scheduled to the Bill by way of amendment, and which was intended to carry out their undertaking to include in the Bill a " special form of account to cover the revenue earned by 'and the charges incurred in connection with road services, together with a statement of the capital employed therein."

It became evident that even the evidence of the President of the Institute of Chartered Accountants, who had been called by the promoters, failed to satisfy the committee that the form of account was satisfactory, and the chairman announced that the committee would only pass the preamble of the Bill, subject to the Ministry of Transport being able either to vary the form of accounts, or to prescribe a more compre

hensive form of accounts showing the particular details which were required.

The result was that• arrangements were made for Sir George Beharrell to be called as a witness from the Ministry after the Whitsun adjournment_ Had Sir George been called as a witness by the promoters themselves, they would no doubt have confined their questions to him to those dealing with the form of the accounts, but the position. was that he was not a witness called either by the promoters or by the opponents, but he attended as the representative of a Government department, and, consequently, dealt not only with the question of accounts, but with the whole aspect of the Bill as it had been reflected by the examination and cross-examination of the promoters' witnesses.

How the Rates for Road Services were to be Fixed.

Before proceeding to deal with the evidence which apparently led to the withdrawal of the Bill, it is necessary to go back to a consideration of some of the proposals of the promoters as disclosed by the amendments to the Bill, and particularly to the manner in_ which the promoters proposed to fix the rates for road transport services. The proposal, put as shortly as possible, was that the rates for the road servicea should be the same as the rates for the rail convey. once, excluding collection and delivery charges and station terminal charges, and that, as in the mad of railway rates under the Railways Act, 1921, the companies should have the right to quote exceptional rates provided they were not more than 40 per eent., below the standard rates.

This method of fixing rates had apparently been explained to the traders who had been interviewed by Mr. Marriott, the assistant general manager of the London and North Western Railway, and by Mr. Thornhill, the solicitor to the same company, who, to use the words of the latter, earlier in the year" embarked upon what I might call a kind of campaign inthe country," in order to deal with the criticisms which had been raised .against the Bill, and the method had apparently received the approval of a certain section of the traders, and some of the Chain hers of Commerce. In fact, it appears not unlikely that such method had been adopted at the suggestion of those with whom Mr. Marriott and Mr. Thornhill had come in contact.

In any case, the method of fixing rates was included as a part of the Bill, and, indeed, as part of the main structure.

Sir George Beharrell, who was examined by the chairman of the committee, went through the sections of Part III of the Railways Act, 1921, which, with certain exceptions, had been incorporated in the Bill. That part of the Act dealt with the-rates for railway traffic. .The earlier sections were the subject of some criticism which might have been overcome by drafting amendments to the Bill, but, in the view of the witness, it was the incorporation of section 58 which raised it question which was'probably the most difficult to deal with, as on that clause the whole question of appropriate,charges by road transport arose.

He pointed out that that section placed upon the Rates Tribunal the onus of adjusting rail charges 09 to revenue, and I imposed upon .the Tribunal under sub-section (2)the special, duty that, when fixing charges in pursuance -of the provisions of the section, they should have regard to the means whieh, in their opinion, were best. calculated to insure the maximum development and extension in the public interest of the carriage by railway of merchandise, which was the underlying spirit of the Act

The witness considered that if, for the purpose of incorporating the section in the Bill, the words " by railway" were altered to " by road" it would place upon the Tribunal two duties wholly inconsistent, because the Tribunal could not, as a body, fix road charges which, would 'have the effect of driving traffic -.from rail thread at a cut rate and be consistent with the duty imposed upon them by the Act of 1921, which was to foster traffic by rail.

The resulte-of the promoters providing extensive services by road,. at charges appreciably less than. existing rail charges, would be to divert tonnage from rail to road, leaving a smaller tonnage of traffic out of which the overhead charges and standard revenue would have to be secured.

In answer to Nfr. MacMillan, for the promoters, Sir George Beharrell stated that, in his view, and in the view of the Minister, the method proposed in the Bill, .namely, of stirting from a rail rate and adapting it to road purposes, was an inappropriate method, and that the principle upon which the charging system in the Bill was framed was unsound.

'It appears that. counsel for the promoters con sidered that the criticism of Sir George Beharrell, representing as itdid the view of the Minister of Transport upon these and other points, struck RO vitally at the fundamental principles whieh were incorporated in the Bill that the Bill could not be proceeded with, and must be withurawit. The committee were obviously loth that the great amount of time and money which had been expended. upon the Bill should be thrown away, and they suggested that the proceedings should be adjourned for a week to enable the promoters to bring forward fresh proposals which might meet the criticisms which had been put forward, but after a short adjournment the committee were informed that the promoters were unable to accept the suggestion. In doing so they were apparently influenced by the fact that when discussing the Bill with certain -traders they had come under bargains with them as to the basis of charging for road services, and that if alternative suggestions were put forward the company's traders, Who had accepted the Bill as it stood, would not have an opportunity of considering such suggestions if the Bill were to go through its further stages before the end of the,session.

A consideration of the cross-examination of the witnesses for the promoters gives the impression that the Minister of Transport and Sir George Beharrell bad taken the opportunity during the recess of reading such cross-examination, and that it had enabled them to view the provisions of the Bill in their true perspective.