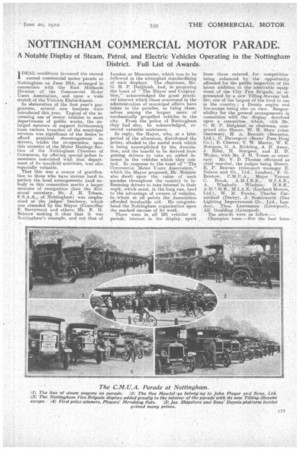 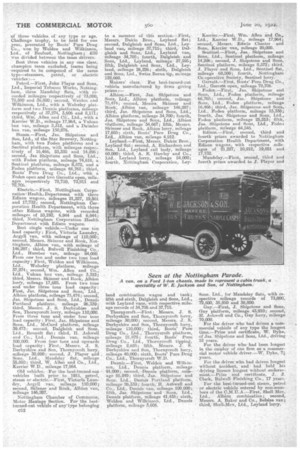 A Notable Display of Steam, Petrol, and Electric Vehicles Operating in the Nottingham District. Full List of Awards.

1 DEAL conditions favoured the second 1 annual commercial motor parade at Nottingham on June 10th, arranged in connection with the East Midlands Division of the Commercial Motor Users Association, and upon a wide stretch of the Victoria Einbankment.

In elaboration of the first year's programme, several new features were introduced this year. Typical of the increasing use of motor vehicles in most departments of public works, the enlarged measure of support forthcoming frum various branches of the municipal services was significant of the desire to afford practical sincouragement to drivers, whilst the co-operation upon this occasion of the Motor Haulage Section of the Nottingham Chamber of Commerce, by offering special prizes to members associated with that department of its manifold activities, was also especially valuable.

That this was a source of gratification to those who have 'striven hard to perfect the local arrangements (and nobody in this connection merits a larger measure of recognition than the divisional secretary, Mr_ J. H. Tr'ease, F.S.A.A., of Nottingham) was emphasized at the judges' luncheon, which was attended by the Mayor (Councillor F. Berryman) and others, Mr. F. G. Bristow making it clear that it was Nottingham's example, and not that of

London or Manchester, which was to be followed in the attempted. standardizing of such displays. The chairman, Mr. G. H. P. Dalgleish, had, in proposing the toast of The Mayor and Corporation," -acknowledged the great practical interest which those concerned in the administration of municipal affairs have taken in the parades, as being themselves among the largest users of -mechanically propelled vehicles in the city. From the police of Nottingham they had also, he acknowledged, received valuable assistance.

' In reply, the Mayor, who, at a later _ Period of the afternoon, distributed the prizes, alluded to the useful work which is being accomplished by the Association, and the benefit; to be derived.from getting driversto take an added interest in the vehicles which they control. In response to the toast of " The Commercial Motor Users Association," which the Mayor proposed, Mr. Bristow also dwelt upon the value of such parades throughout the country in influencing drivers to take interest in their wok, which must, in the long run, tend to the advantage of owners of vehicles, to whom at all points the Association afforded invaluable aid. He congratulated the Nottingham organization upon the marked success of its work.

There were in all 185 vehicles on parade, interest in the display, apart

land combination wagon and tank; fifth and sixth, Dalgleish and Sons, Ltd., with Leyland vans, with respective mileage records of 54,705 and 37,715.

For the driver who had driven a commercial vehicle of any type the longest time.-Prize and certificate, W. Dyke, of Jas: Shipstone and Sons, Ltd., driving 18 years.

For the driver who had been longest in the employ of one firm as a commercial motor vehicle driver.-W. Dyke, 71 years.

For the driver who had driven longest without accident, and had held his driving licence longest without endorsement. -Prize and certificate, J. 3. Clark, Bidwell Finishing Co., 17 years.