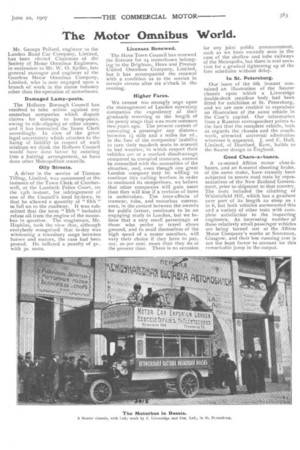 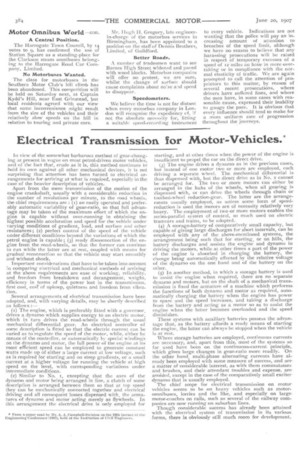 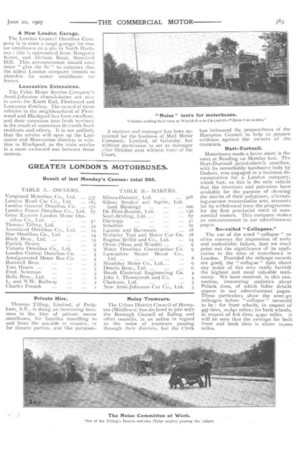 Mr. George Pollard, engineer to the London Road Car Company, Limited, has been elected Chairman of the Society of Motor Omnibus Engineers, in succession to Mr. W. O. Spitler, late general manager and engineer of the Gearless Motor Omnibus Company, Limited, who is now engaged upon a branch of work in the motor industry other than the operation of motorbuses.

The Holborn Borough Council has resolved to take action against any motorbus companies which dispute claims. for damage to lamp-posts, owing to side-slipping or other causes, and it has instructed the Town Clerk accordingly. In view of the great legal uncertainty which attaches to the fixing of liability in respect of such mishaps we think the Holborn Council would have done better by entering into a halving arrangement, as have done other Metropolitan councils.

A driver in the service of Thomas Tilling, Limited, was summoned at the instance of the Town Clerk of Camberwell, at the Lambeth Police Court, on the r3th instant, for infringement of one of the Council's local by-laws, in that he allowed a quantity of " filth " to fail on to the roadway. It was submitted that the term " filth" included refuse oil from the engine of the motorbus in question. The magistrate, Mr. Hopkins, took the view that, although everybody recognised that to-day was witnessing a transitory stage between horses and motors, the case had beer, proved. He inflicted a penalty of 5s.. -with 3s. costs.

The Hove Town Council has renewed the licenses for 24 motorbuses belonging to the Brighton, Hove and Preston United Omnibus Company, Limited, but it has accompanied the renewal with a condition as to the service in certain streets after six o'clock in the evening.

We cannot too strongly urge upon the management of London operating companies the expediency of their gradually reverting to the length of the penny stage that was more common two years ago. The present custom of conveying a passenger any distante between IA mile and 2 miles for rd., in the face of the companies' inability to turn their top-deck seats to account in bad weather, in which respect their vehicles arc at a marked disadvantage compared to canopied tramcars, cannot be reconciled with the necessities of the situation, and., even though one great London company may be willing to continue this cutting warfare in order to confound its competitors, we believe that other companies will gain more than they will lose if a revision of fares is undertaken. The inter-effects of tramcar, tube, and motorbus conveyance, in the contest between the owners for public favour, continues to be an engaging study in London, but we believe that a very small percentage or those who prefer to travel above ground, and to avail themselves of the high speed of a motor omnibus, will vary their choice if they have to pay, say, zo per cent. more than they do at the present time. There is no occasion

for any joint public announcement, such as we have recently seen in the case of the shallow and tube railways of the Metropolis, but there is real occasion for a gradual tightening up of the fare schedules without delay.

Our issue of the 6th instant contained an illustration of the Saurer chassis upon which a Liversidge double-deck omnibus body had been fitted for exhibition at St. Petersburg, and we are now enabled to reproduce an illustration of the same vehicle in the Czar's capital. Our information from a Russian correspondent points to the fact that the complete vehicle, both as regards the chassis and the coachwork, attracted universal admiration wherever it appeared. J. and E. Hall, Limited, of Dartford Kent, builds to the Saurer design in England.

A iz-seated Albion motor char-abanes, and an 8-seated shooting brake, of the same make, have recently been subjected to severe road tests by representatives of the New Zealand Government, prior to shipment to that country. The tests included the climbing of Whistlefield Hill, which has a gradient over part of its length as steep as in 6, but both vehicles surmounted this and a variety of other tests with complete satisfaction to the inspecting engineers. An increasiog number of these relatively small passenger vehicles are being turned out at the Albion Motor Company's works at Scotstoun, Glasgow, and their low running cost is not the least factor to account for this remarkable jump in the output. A Central Position.

The Harrogate Town Council, by 14 votes to 9, has confirmed the use of Station Square as a standing-place for the Clarkson steam omnibuses belonging to the Harrogate Road Car Company, Limited.

The class for motorbuses in the Southern Motor Club's hill climb has been abandoned. This competition will be held on Saturday next, at Captain Kydd's Hill, near East Grinstead, but local residents agreed with our view that some inconvenience might result from the size of the vehicles and their relatively slow speeds on the hill in relation to touring and private cars.

Mr. Thigh H. Gregory, late engineerin-charge of the motorbus services in Birmingham, has been appointed to a position on the staff of Dennis Brothers, Limited, of Guildford.

A number of tradesmen want to see Barnes High Street widened and paved with wood blocks. Motorbus companies will offer no protest, we are sure, whilst the change of surface should cause complaints about nose and speed to disappear.

We believe the time is not far distant when every motorbus company in London will recognise the expediency of, if not the absolute necessity for, fitting a suitable speed-recording instrument to every vehicle_ Indications are not wanting that the police will pay an increasing amount of attention to breaches of the speed limit, although we have no reason to believe that any harassing prosecutions will be raised in respect of temporary excesses of a speed of 12 miles an hour in mere overtaking or in compliance with the normal elasticity of traffic. We are again prompted to call the attention ofproprietors to this matter, by reason of several recent prosecutions, where drivers have suffered fines, and where the men have, in some cases with reasonable cause, expressed their inability to gauge the pace. It is obvious that every influence should tend to make for a more uniform rate of progression throughout the journeys. A New London Garage.

The London General Omnibus Company is to erect a large garage for motor omnibuses on a site in North Hackney : this is approached from Margaret Street, and Alkham Road, Stamford Hill. This announcement should once more " give the lie " to rumours that the oldest London company intends to abandon its motor omnibuses for horses.

The Fyide Motor Service Company's Arrol-Johnston chars-a-banes are now to serve the Knott End, Fleetwood and Lancaster districts. The record of these vehicles in the neighbourhood of Fleetwood and Blackpool has been excellent, and their extension into fresh territory is the result of numerous delvands from residents and others. It is not unlikely that the service will open up the Lancaster and Morecambe districts in relation to Blackpool, as the train service is a most awkward one between those centres.

Thomas Tilling, Limited, of Peckham, S.F., is doing an increasing business in the hire of private motor omnibuses, for families travelling to and from the sea-side or country, or for theatre parties, and like purposes. A receiver and manager has been appointed for the business of Mail Motor Company, Limited, of Grimsby, but without permission to act as manager after October next without leave of the Court.

The Urban District Council of Hampton (Middlesex) has declined to join with the Borough Council of Ealing and other councils, in an action in regard to the noise of tramcars passing through their districts, hut the Clerk has intimated the preparedness of the Hampton Council to help to prepare evidence against the owners of the tramcars.

Motorbuses made a brave show in the meet at Reading on Monday last. The Hart-Durtnall petrol-electric omnibus, with its remarkably handsome body by Dodson, was engaged in a business demonstration for a London company, which fact, as this is the only vehicle that the inventors and patentees have available for the purpose of ..howing the merits of their polyphase, aIernating-current transmission sets, accounts for its withdrawal from the programme for the first provincial meet of cornmercial motors. This company makes an announcement in our advertisement pages.

The use of the word " collapse '' so often conveys the impression of early and undesirable failure, that we must point out the signiEcance of its application to the tires of motorbuses in London. Provided the mileage records are good, the " collapse " data about any make of tire may really furnish the highest and most valuable testimony. We have received, in this connection, interesting statistics about Polack tires, of which fuller details appear in our advertisement pages. These particulars show the aven.ge mileages before " collapse " occurred to be : for front wheels, in respect of 497 tires, 10,641 miles; for back wheels, in respect of 816 tires, 9,991 miles. It will be seen that the average for both front and back tires is above to,000 miles.