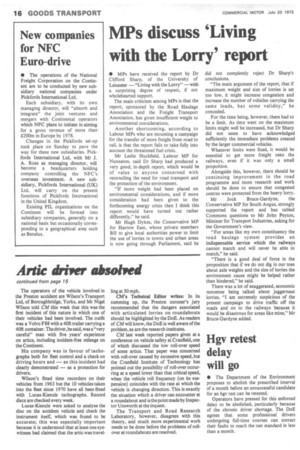 Page 18, 20th July 1973 — MPs discuss 'Living with the Lorry' report
Close
Noticed an error?
If you've noticed an error in this article please click here to report it so we can fix it.
Keywords : Haulage, Truck, Lorry, Semi-trailer Truck, Freight Train, Motoring Taxation In The United Kingdom, Steam Wagon

• MPs have received the report by Dr Clifford Sharp, of the University of Leicester —"Living with the Lorry" —with a surprising degree of respect, if not wholehearted support.

The main criticism among MPs is that the report, sponsored by the Road Haulage Association and the Freight Transport Association, has given insufficient weight to environmental considerations.

Another shortcoming, according to Labour MPs who are mounting a campaign for the transfer of more freight from road to rail, is that the report fails to take fully into account the threatened fuel crisis.

Mr Leslie Huckfield, Labour MP for Nuneaton, said Dr Sharp had produced a very good, in-depth report, which would be of value to anyone concerned with reconciling the need for road transport and the protection of the environment.

"If more weight had been placed on environmental considerations, and if more consideration had been given to the forthcoming energy crisis then I think this report would have turned out rather differently," he said.

Mr Hugh Dykes, the Conservative MP for Harrow East, whose private members Bill to give local authorities power to limit the use of lorries in towns and urban areas is now going through Parliament, said he did not completely reject Dr Sharp's conclusions.

"The main argument of the report, that if maximum weight and size of lorries is set too low, it might increase congestion and increase the number of vehicles carrying the same loads, has some validity," he conceded.

For the time being, however, there had to be a limit. As time went on the maximum limits might well be increased,. but Dr Sharp did not seem to have acknowledged sufficiently the immediate problems created by the larger commercial vehicles.

Whatever limits were fixed, it would be essential to get more freight onto the railways, even if it was only a small proportion, Alongside this, however, there should be continuing improvement in the road programme and more research and work should be done to ensure that congested centres were protected from the heavy lorry.

"For areas like my own constituency the road haulage system provides an indispensable service which the railways cannot match and will never be able to match," he said.

"There is a good deal of force in the proposition that if we do not dig in our toes about axle weights and the size of lorries the environment cause might be helped rather than hindered," he said.

There was a lot of exaggerated, economic nonsense being talked about juggernaut lorries. "I am extremely suspicious of the present campaign to drive traffic off the roads and on to the railways because it would be disastrous for areas like mine," Mr Bruce-Gardyne added.