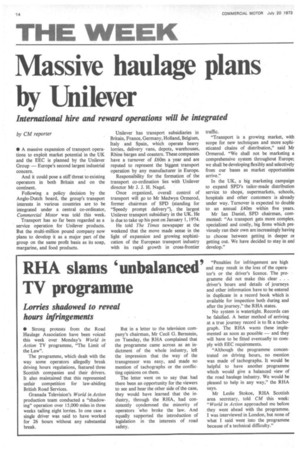 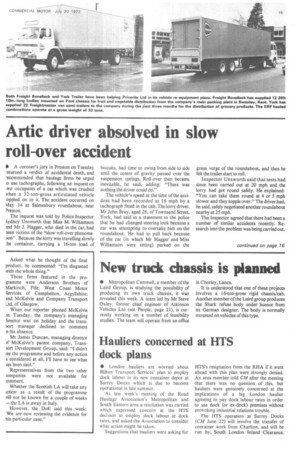 • Strong protests from the Road Haulage Association have been voiced this week over Monday's World in Action TV programme, "The Limit of the Law".

The programme, which dealt with the way some operators allegedly break driving hours regulations, featured three Scottish companies and their drivers. It also maintained that this represented unfair competition for law-abiding British Road Services.

Granada Television's World in Action production team conducted a "shadowing" operation over 15,000 miles in three weeks tailing eight lorries. In one case a single driver was said to have worked for 26 hours without any substantial break. But in a letter to the television company's chairman, Mr Cecil G. Bernstein, on Tuesday, the RHA complained that the programme came across as an indictment of the whole industry, left the impression that the way of the transgressor was easy, and made no mention of tachographs or the conflicting opinions on them.

The letter went on to say that had there been an opportunity for the viewers to see and hear the other side of the case, they would have learned that the industry, through the RHA, had consistently condemned the minority of operators who broke the law. And equally supported the introduction of legislation in the interests of road safety. "Penalties for infringement are high and may result in the loss of the operator's or the driver's licence. The programme did not make this clear . . . driver's hours and details of journeys and other information have to be entered in duplicate in a record book which is available for inspection both during and after the journey," the RHA states.

No system is watertight. Records can be falsified. A better method of arriving at a true journey record is to fit a tachograph. The RHA wants these implemented as soon as possible — and they will have to be fitted eventually to comply with EEC requirements.

"Although the programme concentrated on driving hours, no mention was made of tachographs. It would be helpful to have another programme which would give a balanced view of the road haulage industry. We would be pleased to help in any way," the RHA says.

Mr Leslie Stokoe, RHA Scottish area secretary, told CM this week: "World in Action approached me before they went ahead with the programme. I was interviewed in London, but none of what I said went into the programme because of a technical difficulty." Asked what he thought of the final product, he commented: "I'm disgusted with the whole thing."

When our reporter phoned McKelvie m Tuesday, the company's managing iirector was on holiday and the trans)ort manager declined to comment n his absence.

Mr James Duncan, managing director )f McKelvie's parent company, Trans )ort Development Group, said: "I didn't ;ee the programme and before any action s considered at all, I'll have to see what las been said."

Representatives from the two other ompanies were not available for :omment.

Whether the Scottish LA will take any iction as a result of the programme sill not be known for a couple of weeks — the LA is away in Italy.

However. the DoE said this week: .We are now reviewing the evidence for his particular case."