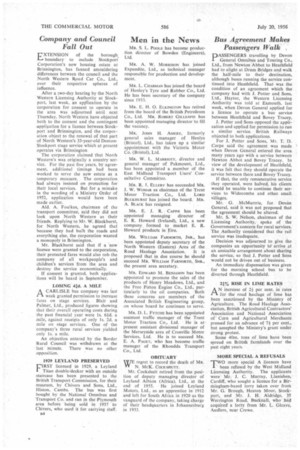 PASSENGERS travelling by Devon General Omnibus and Touring Co., Ltd., from Newton Abbot to Heathfield had to alight at Drum Bridges and walk the half-mile to their destination, although buses running the service continued into Heathfield. That was the condition of an agreement which the company had with J. Potter and Sons, Ltd., Haytor, the Western Licensing Authority was told at Exmouth, last week, when Devon General applied for a licence to operate a bus service between Heathfield and Bovey Tracey.

J. Potter and Sons opposed the application and applied for permission to run a similar service. British Railways objected to both applications.

If that, the only remunerative service they operated, were halved, his clients would be unable to continue their services to Widecombe and other small villages.

Mr. G. McMurtrie, for DevOn General, said it was not proposed that the agreement should be altered.

Mr. S. W. Nelson, chairman of the Licensing Authority, spoke of the Government's concern for rural services. The Authority considered that the rail service was inadequate.

Decision was adjourned to give the companies an opportunity to arrive at an amicable arrangement about sharing the service, so that J. Potter and Sons would not be driven out of business.

An immediate dispensation was given for the morning school bus to be diverted through Heathfield.

AN increase of 2-1per cent. in rates for the road haulage of lime has been sanctioned by the Ministry of Agriculture. The Road Haulage Association, British Agricultural Contractors' Association and National Association of Corn and Agricultural Merchants pressed for an advance of 74 per cent., but accepted the Ministry's grant under strong protest.

Some 40m. tons of lime have been spread on British farmlands over the past eight years.