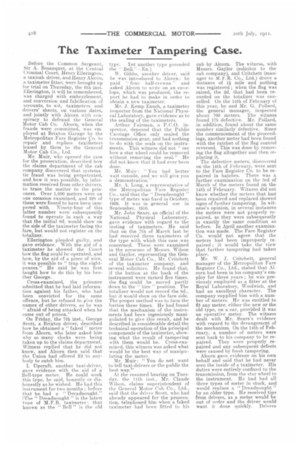 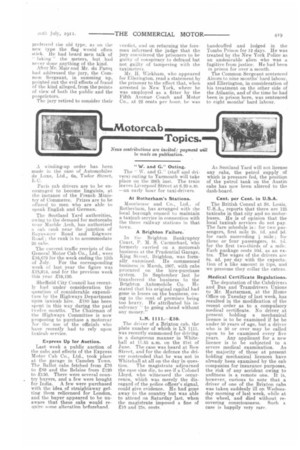 Page 4, 20th July 1911 — The Taximeter Tampering Case.
Close
Noticed an error?
If you've noticed an error in this article please click here to report it so we can fix it.
Keywords : Measuring Instruments, Taxicabs, Taximeter, Ohmer Fare Register, Law / Crime

Before the Common Sergeant, Sir A. Boss,nquet, at the Central Criminal Court, Henry Elleringtoie a taxicab driver, and Henry Alcorn, a taximeter fitter, were brought up for trial on Thursday, the 6th inst. Ellerington, it will be remembered, was charged with embezzlement, and conversion and falsification of accounts, to wit, taximeters and drivers' sheets, on various dates, and jointly with Alcorn with conspiracy to defraud the General Motor Cab Co. Alcorn, when the frauds were committed, was employed at Brixton Garage by the Metropolitan Fare Register Co. to repair • and replace taximeters leased by them to the General Motor Cab Co., Ltd.

Mr. Muir, who opened the case for the prosecution, described how the claims department of the cab company discovered that systematic fraud was being perpetrated, and how it was possible, by information received from other drivers, to trace the matter to the prisoners. Over 1,000 meters were on one occasion examined, and 328 of these were found to have been tampered with. Ninety-four of this latter number were subsequently found to operate in such a way that the initial 8d. would show on the side of the taximeter facing the fare, but would not register on the totalizer.

Ellerington pleaded guilty, and gave evidence. With the aid of a taximeter he showed the Court how the flag could be operated, and how, by the aid of a piece of wire, it was possible to " trap the eightpences. ' He said he was first taught how to do this by his brother George.

Cross-examined, the prisoner admitted that he had laid information against his father, who had been convicted for the same offence, but he refused to give the names of other drivers, as he was " afraid of being attacked when he came out of prison." On Friday, the 7th inst., George Scott, a Brixton driver, described how he obtained a " faked " meter from Alcorn, who later asked him why so many clocks were being taken up to the claims department. Witness replied that he did not know, and Alcorn then said that the Union had offered P2 to anybody to catch him.

I. Uperaft, another taxi-driver, gave evidence with the aid of a Bell-type meter. He could work this type, he said, honestly or dishonestly as he wished. He had this instrument for two months ; before that he had a "Dreadnought." [The " Dreadnought " is the latest type of M.F.R. taximeter : that known as the "Bell " is the old type. Yet another type preceded the " Bell."—En.] W. Gibbs, another driver, said he was introduced to Alcorn : he paid " four half-crowns " and asked Alcorn to write on an envelope, which was produced, the report he had to make in order to obtain a new taximeter.

Mr. J. Kemp Enoch, a taximeter inspector from the National Physical Laboratory, gave evidence as to the sealing of the taximeters.

Arthur Fairman, a P.C.O. inspector, deposed that the Public Carriage Office only sealed the transmission gear, and had nothing to do with the seals on the instruments. This witness did not " see how a star wheel could be removed without removing the seal." He did not know that it had ever been done.

Mr. Muir : " You had better wait outside, and we will give you a demonstration."

Mr. A. Long, a representative of the Metropolitan Fare Register Co., said that the " Dreadnought " type of meter was fixed in October, 1909. It was in general use in September, 1910.

Mr. John Sears, an official of the National Physical Laboratory, gave evidence with regard to the testing of taximeters. He said that on the 7th of March last he had received three taximeters of the type with which this case was concerned. These were examined in the presence of Messrs. Wilson and Gaylor, representing the General Motor Cab Co., Mr. Critchett of the taximeter company, and several solicitors. He found that, if the button at the back of the instrument were turned five times. the flag could be moved partly down to the " hire " position. The totalizer would not record the 8d., but it would show on the fare side. The proper method was to turn the button three times. He had found that the mechanism of the instruments had been ingeniously manipulated to give this result, and he described in considerable detail the technical operation of the principal components of the taximeter, showing what the result of tampering with them would be. Cross-examined, this witness was asked what would be the best way of manipulating the meter. Mr. Muir : "You do not want to tell taxi-drivers or the public the best way." At the resumed hearing on Tuesday, the 11th inst., Mr. Claude Wilson, claims superintendent of the General Motor Cab Co., Ltd.. said that the driver Scott, who had already appeared for the prosecution, telephoned him when a faked taximeter had been fitted to his

cab by Alcorn. The witness, with Messrs. Gaylor (solicitor to the cab company), and Critchett (manager to M.F.R. Co., Ltd.) drove a distance of 14 mile and nothing was registered ; when the flag was raised, the 2d. that had been recorded on the totalizer was cancelled. On the 14th of February of this year, he and Mr. G. Pollard, the general manager, inspected about 700 meters. The witness found 175 defective. Mr. Pollard, in addition, found about the same number similarly defective. Since the commencement of the proceedings, another meter had been found with the ratchet of the flag control reversed. This was done by removing the flag altogether and then replacing it. The defective meters, discovered on the 14th of February, were sent to the Fare Register Co. to be repaired in batches. There was a further examination on the 3rd of March of the meters found on the 14th of February. Witness did not know whether the meters that had been repaired and replaced showed signs of further tampering: In witness's opinion, in several instances the meters were not properly repaired, as they were subsequently in exactly the same condition as before. In April another examination was made. The Fare Register Co. would not agree that the meters had been improperly repaired ; it would take the view that further tampering had taken place. Mr. W. J. Critchett, general manager of the Metropolitan Fare Register Co., Ltd., stated that Alcorn had been in his company's employ for three years ; he was previously employed as a fitter at the Royal Laboratory, Woolwich, and had an excellent character. The company supplied him with a number of meters. He was entitled to fit any meter, either the new or the old type, on a ear, provided it was an operative meter. The witness dealt with Mr. Sears's evidence with regard to the derangement of the mechanism. On the 14th of February, a number of meters were sent back to his company to be repaired. They were properly repaired and any subsequent defects were caused by fresh tampering.

Alcorn gave evidence on his own behalf and said that he had never seen the inside of a taximeter. His duties were entirely confined to the transmission, from the star wheel to the instrument. He had had all three types of meter in stock, and would replace a " Dreadnought " by an older type. He received tips from drivers, as a meter would be out of order and the driver would want it done quickly. Drivers

preferred the old type, as on the new type the flag would often stick. He had heard men talk of '• faking " the meters, but had never done anything of the kind. After Mr. Muir and Mr. du Parcq had addressed the jury, the Common Sergeant, in summing up, pointed out the evil effects of fraud of the kind alleged, from the points of view of both the public and the proprietors.

The jury retired to consider their verdict, and on returning the foreman informed the judge that the 3ury considered the prisoners to be guilty of conspiracy to defraud but not guilty of tampering with the taximetets.

Mr. H. Wickham, who appeared for Ellerington, read a statement by the prisoner to the effect that, when arrested in New York, where he was employed as a fitter by the Fifth Avenue Coach and Motor Co., at 22 cents per hour. he was

handcuffed and lodged in the Tombs Prison for 12 days. He was treated by the New York Police as an undesirable alien who was a fugitive from justice. He had been in prison for over a month.