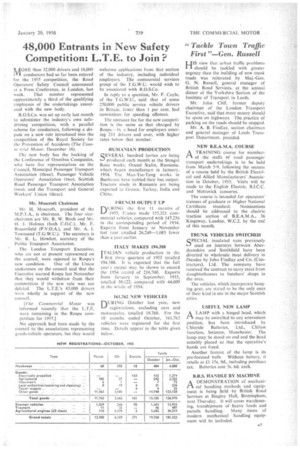 conductors had so far been.entered for the 1955 competition, the Road Operators Safety Council announced at a Press Conference. in London, last week. That number represented approximately a third of the qualifying employees of the undertakings associated with the new body.

R.O.S.Co. was set up early last month to administer the industry's own safedriving competition, with a parallel scheme for conductors, following a dispute on a new rule introduced into the competition of the Royal Society for the Prevention of Accidents (The Comm vela! Motor, December 16). .

The London Transport Executive, who are not at present represented on the council, were opposed to Rospa's

new condition. One of the Union spokesmen on the council said that the Executive warned Rospa last November that they would withdraw from their competition if the new rule was not deleted. The L.T.E.'s 43,000 drivers were wholly in support of the ' new council.

(The Commercial Motor was informed recently that the L.T.F,. were remaining in the Rospa competition for 1955.] No approach had been made by the council to the associations representing goods-vehicle operators, but they would

welcome applications from that section of the industry, including individual employers. The commercial services group of the T.G.W.U. would wish to be associated with R.O.S.Co.

In reply to a question, Mr. F. Coyle, of the T.G.W.U., said that of some 250,000 public service vehicle drivers in Britain, fewer than 1 per cent. had convictions for speeding offences.

The entrance fee for the new competition is the same as that charged by Rospa—ls. a head for employers entering 211 drivers and over, with higher rates below that number.

produced each month at the Steagul Rosu works, Orasul Stalin, Rumania, which began manufacture in January, 1954. The Mao-Tse-Tung works in Bucharest have trebled their bus output. Tractors made in Rumania are being exported to Greece, Turkey, India and China.

DUR1NG October last year, new registrations, excluding cars and motorcycles, totalled 19,760. For the 10 months ended October, 161,762 vehicles were registered for the first time. Details appear in the table given below.