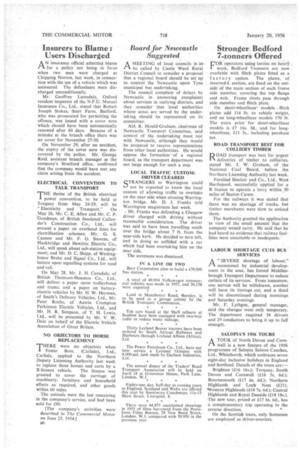 Page 40, 20th January 1956 — Stronger Bedford 7–tonners Offered
Close
Noticed an error?
If you've noticed an error in this article please click here to report it so we can fix it.
Keywords : G

L'Olts operators using lorries on heavYI work, Bedford 7-tonners are now available with flitch plates fitted as a facto r y option. The plates, of inverted-L section, are fixed on the outside of the main section of each frame side member, covering the top flange and web. Frame rivets pass through side member and flitch plate. On short-wheelbase' modelsflitch plates add 114 lb. to vehicle weight, and on long-wheelbase models 170 lb. The extra price for short-wheelbase models is £7 16s. 3d., and for longwheelbase, £11 5s., including purchase tax.

ROAD transport was best for urgent deliveries of timber to collieries. stated Mr. J. W. Graham, of the National Coal Board, before the Northern Licensing Authority last week.

Forslind Sinclair and Co., Ltd., West Hartlepool, successfully applied for a B licence to operate a lorry within ,30 miles of Seaton Carew.

For the railways it was stated that there was no shortage of trucks, but timber merchants were slow to unload them. The Authority granted the application in view of the small amount that the company would carry. He said that he had heard no evidence that railway facilities were unsuitable or inadequate.

A" SEVERE shortage of labour," occasioned by industrial development in the area, has forced Middlesbrough Transport Department to reduce certain of its services. From tomorrow, one service will be withdrawn, another will have its timings cut, and a third will be discontinued during mornings and Saturday evenings. Mr. F. Lythgoe, general manager, said the changes were only temporary. The department required 34 drivers and 29 conductors to bring it up to full strength.

On the Scottish tours, only Scotsmen are employed as driver-couriers.