Two Bites at the Cherry 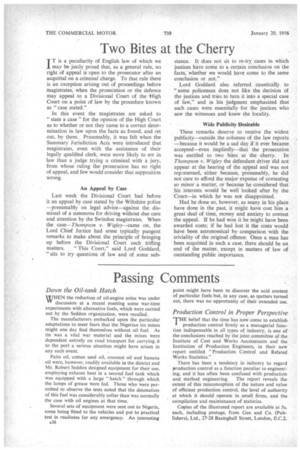 IT is a peculiarity of English law of Which we may be justly proud that, as a general rule, no right of appeal is open to the prosecutor after an acquittal on a criminal charge. To that rule there is an exception arising out of proceedings before magistrates, when the prosecution or the defence may appeal to a Divisional Court of the High Court on a point of law by the procedure known as "case stated."

In this event the magistrates are asked to "state a case" for the opinion of the High Court as to whether or not they came to a correct determination in law upon the facts as found, and set out, by them. Presumably, it was felt when the Summary Jurisdiction Acts were introduced that magistrates, even with the assistance of their legally qualified clerk, were more likely to err in law than a judge trying a criminal with a jury, from whose ruling the prosecution has no right of appeal, and few would consider that supposition wrong.

An Appeal by Case Last week the Divisional Court had before it an appeal by case stated by the Wiltshire police —presumably on legal advice—against the dismissal of a summons for driving without due care and attention by the Swindon magistrates. When the case—Thompson v. Wigley—came on, the Lord Chief Justice had some typically pungent remarks to make about the principle of bringing up before the Divisional Court such trifling matters. "This Court," said Lord Goddard, "sits to try questions of law and of some sub stance. It does not sit to re-try cases in which justices have come to a certain conclusion on the facts: whether we would have come to the same conclusion or not."

Lord Goddard also referred caustically, to "some policeman does not like the decision of the justices and tries to turn it into a special case of law," and in his judgment emphasized that such cases were essentially for the justices who saw the witnesses and knew the locality.

Wide Publicity Desirable These remarks deserve to receive the widest publicity—outside the columns of the law reports —because it would be a sad day if it ever became accepted—even implied ly—that the prosecution was entitled to two bites at the cherry. In Thompson v. Wigley the defendant driver did not appear at the hearing of the appeal and was not repi-esented, either because, presumably, he did not care to afford the major expense of contesting so minor a matter, or because he considered that his interests would be well looked after by the Court—in which he was not disappointed.

Had he done so, however, as many in his place have done in the past, it might have cost him a great deal of time, money and anxiety to contest the appeal. If he had won it he might have been awarded costs: if he had lost it the costs would have been astronomical by comparison with the triviality of the original offence. Once a man has been acquitted in such a case, there should be an end of the matter, except in matters of law of outstanding public importance.