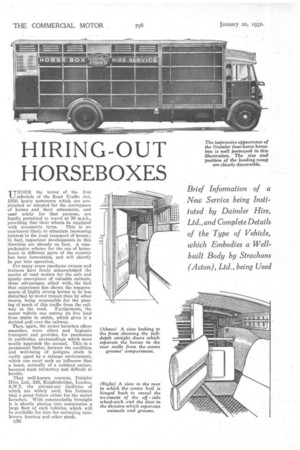 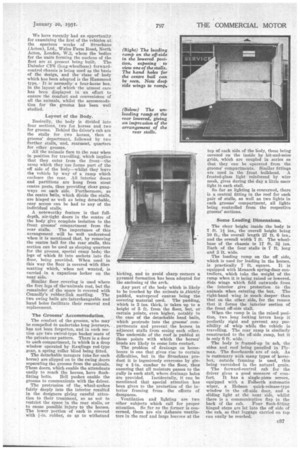 Page 58, 20th January 1931 — HIRING-OUT HORSEBOXES
Close
Noticed an error?
If you've noticed an error in this article please click here to report it so we can fix it.

TTNDER the terms of the first ) schedule of the Road Traffic Act, 1930, heavy motorcars which are constructed or adapted for the conveyance of horses and theirattendants, and used solely for that purpose, are legally permitted to travel at 30 m.p.h., providing that their wheels be equipped

with pneumatic tyres. This is. an enactment likely to stimulate increasing interest in the road transport of horses ; in fact, important developments in this direction are already on foot. A com prehensive scheme for the use of horseboxes in different parts of the country has been formulated, and will shortly be put into operation.

For many years racehorse owners and trainers have freely acknowledged the merits of road motors for the safe and speedy conveyance of valuable animals, these advantages, allied with the fact that experience has shown the tempera ments of highly strung horses to be less disturbed by motor transit than by other means, being responsible for the pass ing of much of this traffic from the rail way to the road. Furthermore, the

motor vehicle can convey its live load from stable to stable, which gives it a decided pull over the railway.

Then, again, the motor horsebox offers smoother, more silent and hygienic transport and provides, for racehorses in particular, surroundings which more nearly approach the normal. This is a paramount factor, because the condition

and well:being of pedigree stock is CaSiiy upset by a strange environment, which can exert such an influence that La beast, normally of a subdued nature, becomes most refractory and difficult to handle.

S.W.7, the private-car facilities of

which are widely used, has foreseen that a great future exists for the motor

horsebox. With commendable foresight it is shortly placing into commission a large fleet of such vehicles, which will be available for hire for conveying racehorses, hunters and other stock.

We have recently had an opportunity for examining the first of the vehicles at the spacious works of Strachans (Acton), Ltd., Wales Farm Road, North Acton, London, W.3, where the bodies for the units forming the nucleus of the fleet are at present being built. The Daimler CF6 (long-wheelbase) forwardcontrol chassis is being used as the basis of the design, and the class of body which has been adopted is the Hammond type.. It is normally a four-horse box. in the layout of which 'the utmost care has been displayed in an effort to ensure the comfort and convenience of all the animals, whilst the accommodation for the grooms has been well studied.

Layout of the Body.

Basically, the body is divided into four sections, two for horses and two for grooms. Behind the driver's cab are the stalls for two horses, then a grooms' department, followed by two further stalls, and, rearmost, quarters for other grooms.

All the animals face to the rear when in position for travelling, which implies that they enter from the front—the ramp which they use forms part of the off side of the body—whilst they leave the vehicle by way of a ramp which encloses the rear. All interior doors and partitions are hung from stout centre posts, thus providing clear gangways on each side. Furthermore, as the centre bails, which divide the stalls, are hinged as Well as being detachable, easy access can be had to any of the individual stalls.

A noteworthy feature is that fulldepth, air-tight doors in the centre of the body give complete isolation to the front grooms' compartment from the

rear stalls. The importance of this arrangement will be well understood when it is mentioned that, by removing the centre bail for the rear stalls, this section can be used as sleeping quarters for the grooms, special camp beds,the legs of which fit into sockets into the floor, being provided. When used in this way the floor is covered with fibre matting which, when not wanted, is carried in a capacious locker on the near side.

Similar floor covering is used where the fore legs of the -animals rest, but the remainder of the space is covered with Connolly's rubber-link matting. The two swing bails are interchangeable and hand holes facilitate their removal and replacement.

The comfort of the grooms, who may he compelled to undertake long journeys, has not been forgotten, and in each section are two swivel-type bucket seats of the private-ear pattern. There is a door to each compartment, in which is a drop window operated by Rawlings rod-type gear, a spring roller blind being fitted.

The detachable mangers (one for each horse) are slipped on to the swing doors separating the grooms from the animals. These doors, which enable the attendants easily to reach the horses, have flush

fitting bolts. Bell pushes enable the grooms to communicate with the driver.

The protrusion of the, wheel-arches fairly deeply into the interior resulted in the designers giving careful attention to their treatment, so as not to restrict the space in the rear stalls, or to cause possible injury to the horses. The lower portion of each is covered with Isin. rubber, so as to withstand kicking, and to avoid sharp corners a pyramid formation has been adopted for the enclosing, of the arch.

Any part of the body which is likely to be touched by the animals is .thickly padded, waterproof canvas being the covering material used. The padding, which is 3 ins, thick, is taken up to a height of 5 ft. from the floor, but, at certain points, even higher, notably in the case of the detachable head bails, which protrude into the grooms' compartments and prevent the horses in adjacent stalls from seeing each other. The underside of the roof is padded at those points with which the horses' heads are likely to come into contact.

The problem of drainage on horseboxes is one that gives rise to certain difficulties, but in the Strachans product it is ingeniously overcome by giv ing a camber to the floor, thus ensuring that all moisture passes to the gully in each stall, where drainage holes are provided. Incidentally, it can be mentioned that special attention has been given to the protection of the interior framing from . the effects of dampness.

Ventilation and lighting are two ether subjects which call for proper attention. So far as the former is concerned, there are six Ashanco ventilators in the roof and large louvres at the top of each side of the body, these being covered on the inside by hit-and-miss grids, which are coupled in series so that they can be operated from the grooms' compartments. Similar fittings • are used in the front bulkhead. A frosted-glass light reinforced by wire mesh, gives during the day a little more light in each stall.

So far as lighting is concerned, there is a central fitting in the roof for each pair of stalls, as well as two lights in each grooms' compartment, all lights being controlled from the respective grooms' sections.

The loading ramp on the off side, which is used for leading in the horses,

is practically 7 ft. square. It is equipped with Monarch spring-door controllers, which take the weight of the ramp when it is being raised or lowered. Side wings which fold outwards from the interior give protection to the animals when entering the box. The right-hand wing is much deeper than that on the other side, for the reason that it forms the interior section of the front off-side stall.

When the ramp is in the raised position, two long locking levers keep it perfectly rigid and prevent any possibility of whip while the vehicle is travelling. The rear ramp is similarly constructed to the off-side ramp, but it is only 6 ft. wide.

The body is framed-up in ash, the sides and roof being panelled in Plymax. The floorboards are of oak. As is customary with many types of horsebox, outside framing is used, this being varnished in the natural grain.

fort. It has a single-piece screen, equipped with a Falberth automatic wiper, a Hobson quick-release-type window in the off-side door, and a sliding light at the near side, whilst there is a communication flap in the

back of the cab. Four flush-fitting hinged steps are let into the off side of the cab, so that luggage carried on top can easily be reached.