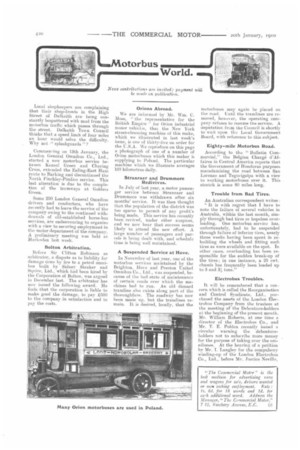 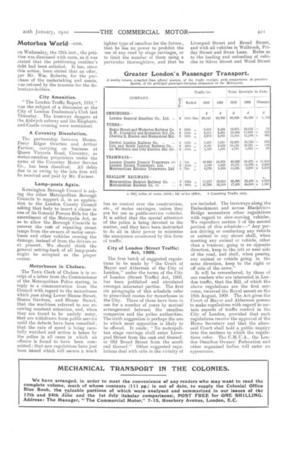 Page 8, 20th January 1910 — World.
Close
Noticed an error?
If you've noticed an error in this article please click here to report it so we can fix it.
Keywords : Light Rail, Tram, Coventry, Traffic, Nottingham Corporation Tramways

News contribution are invited: payment will be made on pubtiration.

Local shopkeepers are complaining that their shop-fronts in the High Street of Dalkeith are being constantly bespattered with mud from the motorbus traffic which passes through the street. Dalkeith Town Council thinks that a speed limit of four miles an hour would solve the difficulty. Why not " splashguards " ?

Commencing on 13th January, the London General Omnibus Co., Ltd., started a new motorbus service between Kensal Green and Charing Cross, extended the Ealing-East Ham route to Barking and discontinued the North Finehley-Pimlico service. This last alteraticn is due to the completion of the tramways at Goldets Green.

Some 250 London General Omnibus drivers and conductors, who have recently had to leave the service of the company owing to the continued withdrawals of old-established horse-bus services, are endeavouring to organize with a view to securing employment in the motor department of the company. A preliminary meeting was held at Harlesden last week.

Before Sir Clifton Robinson as arbitrator, a dispute as to liability for damage done by fire to a petrol omnibus built by Sidney Straker and Squire, Ltd., which had been hired by the Corporation of Bolton, was argued in December last. The arbitrator has now issued the following award. He finds that the corporation is liable to make good the damage, to pay 2500 to the company in satisfaction and to pay the costs. Orions Abroad.

We are informed by Mr. Wm. C. Moss, " the representative for the British Empire • for Orion industrial motor vehicles, that the New York street-cleansing machine of this make, which we illustrated in last week's issue, is one of thirty-five on order for the U.S.A. We reproduce on this page a photograph of one of a number of Orion motorbuses which this maker is supplying to Poland. The particular machine which we illustrate averages 160 kilometres daily.

In July of last year, a motor passenger service between Stranraer and Drnmmore was withdrawn after six months' service. It was then thought that the population of the district was too sparse to permit of any profit's being made. This service has recently been revived, under other auspices, and we now hear that success seems likely to attend the new effort. A large number of passengers and parcels is being dealt with, and schedule time is being well maintained.

A Suspended Service at Hove.

In November of last year, one of the motorbus services maintained by the Brighton, Hove and Preston United Omnibus Co., Ltd., was suspended, became of the had state of maintenance of certain roads over which the machines had to run. An old disused tramline also exists along part of the thoroughfare. The roadway has now been mane up, but the tramlines remain. It is desired, locally, that the motorbuses may again be placed ou the road. Until the tramlines are removed, howe‘er, the operating coin

refuses to resume the service. A deputation from the Council is shortly to wait upon the Local Government Board, with reference to this subject.

According to the " Bulletin Commercial," the Belgian Charge d'Affaires in Central _America reports that the Government of Honduras purposes macadamizing the road between San Lorenzo and Tegucigalpa with a view to working motorbuses over it. This stretch is some 80 miles long.

An Australian correspondent writes " It is with regret that I have to note the failure of several vehicles in Australia, within the last month, simply through bad tires or hopeless overloading. One motorbus service has, unfortunately, had to be suspended through failure of inferior tires, nearly three weeks having been spent in rebuilding the wheels and fitting such tires as were available on the spot. In other eases, overloading has been responsible for the sudden break-up of the tires in one instance, a 25 cwt. chassis has frequently been loaded up to 3 and 31 tons."

It will be remembered that a coecern which is called the_Reorganisation and Control Syndicate, Ltd., purchased the assets of the London Elec.trobus Company from the trustees at the meeting of the Debenture-holders at the beginning of the present month. Mr. William Roberts, at one time a director of the Electrobus Co., and Mr. T. E. Polden recently issued a circular warning the debentureholders not to subscribe more money for the purpose of taking over the omnibuses. At the hearing of a petition by Mr. T. Langley for the compulsory winding-up of the London Eleetrobus Co., Ltd., before lir. Justice Neville,

on Wednesday, the 12th inst., the petition was dismissed with costs, as it was stated that the petitioning creditor's debt had been satisfied. It has, since this action, been stated that an offer, per Mr. Wm. Roberts, for the purchase of the undertaking and assets, was refused by the trustees for the debenture-holders.

"The London Traffic Report, 1910," was the subject of a discussion at the City of London Tradesmen's Club last Thursday. The tramway dangers at the Aldwych subway and the Elephantand-Castle crossing were mentioned.

The partnership between Messrs. Percy Edgar Overton and Arthur Farmer, carrying on business at Queen Victoria Road, Coventry, as motor-omnibus proprietors under the name of the Coventry Motor Service Co., has been dissolved. All debts due to or owing by the late firm will be received and paid by Mr. Farmer.

Kensington Borough Council is asking the other Metropolitan Borough Councils to support it, in an application to the London County Council asking that body to insert a clause in one of its General Powers Bills for the amendment of the Metropolis Act, so as to allow the Borough Councils to recover the cost of repairing street lamps from the owners of motor omnibuses and other vehicles causing the damage, instead of from the drivers as at present. We shoukl think the general setting-back of all lamp-posts might be accepted as the proper course.

The Town Clerk of Chelsea is in receipt of a letter from the Commissioner of the Metropolitan Police stating, in reply to a communication from the Council with regard to the motorbuses which pass along Lower Sloane Street, Sloane Gardens, and Sloane Street, that the machines referred to are receiving constant attention, and, when they are found to be unduly noisy, they are withdrawn from public service until the defects have been remedied ; that the rate of speed is being carefully watched and action is taken by the police in all cases in which an offence is found to have been committed; that new regulations have just been issued which will secure a much lighter type of omnibus for the future, that he has no power to prohibit the use of any road by stage carriages, or to limit the number of them using a particular thoroughfare, and that he has no control over the construction, etc., of motor carriages, unless they are for use as public-service vehicles. It is added that the special attention of the police is being devoted to the matter, and they have been instructed to do all in their power to minimize the annoyance occasioned by this form of traffic.

The first batch of suggested regulations to be made by '' the Court of Mayor and Aldermen of the City of London," under the terms of the City of London (Street Traffic) Act, 1909, has been published and circulated amongst interested parties. The first six paragraphs of this schedule refer to prescribed routes for motorbuses in the City. Three of these have been in use for a number of years by mutual arrangement between the omnibus companies and the police authorities. The sixth suggestion is perhaps the one to which most opposition is likely to be offered. It reads : No metropolitan stage carriage shall enter Liverpool Street from the east end thereof, or Old Broad Street ftom the south end thereof." Other suggested regulations deal with cabs in the vicinity of

Liverpool Street and Broad Street, and with all vehicles in Walbrook, Friday Street and Swan Lane. Rules as to the loading and unloading of vehicles in Silver Street and Wood Street are included. The tramways along the Embankment and across Blackfriars Bridge necessitate other regulations with regard to slow-moving vehicles. We reproduce section 5 of the second portion of this schedule;-" Any person driving or conducting any vehicle or animal in any street shall, when meeting any animal or vehicle, other than a tramcar, going in an opposite direction, keep to the left or near aide of the road, and shall, when passing any animal or vehicle going in the same direction, keep to the right or off side of the same."

It will be remembered, by those of our readers who are interested in London traffic, that the Bill, a which the above regulations are the first outcome, received the Royal assent on the 16th August, 1909. The Act gives the Court of Mavor and Aldermen powers to make regu'lations with regard to certain aspects of traffic control in the City of London, provided that such regulations receive the approval of the Home Secretary and that the aforesaid Court shall hold a public inquiry into the matters to which the regulations refer. The C.M.U.A., the London Omnibus Owners' Federation and other organized bodies will enter an appearance.