The Institute of Metals. 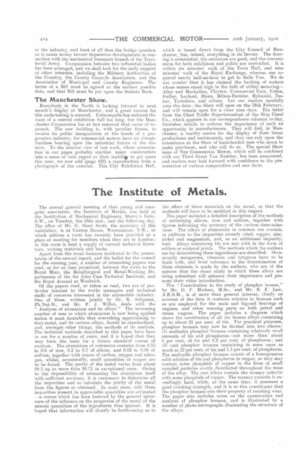 The annual general meeting of that young and energetic association, the Institute of Metals, was held at the Institution of Mechanical Engineers, Storey's Gate, S.W., on Tuesday, the 18th inst., and the following day. The office of Mr. G. Shaw Scott, the secretary of this institution, is at Caxton _House, Westminster, S.W., at which address a room has recently been provided as a place of meeting for members when they are in London ; in this room is kept a supply of current technical literature, writing materials and books.

Apart from the usual business incidental to the presentation of the annual report, and the ballot for the council for the ensuing year, a number of interesting papers was read, as far as time permitted, between the visits to the Royal Mint, the Metallurgical and Metal-Working Departments of the Sir John Cass Technical Institute, and the Royal Arsenal at Woolwich.

Of the papers read, or taken as read, two are of particular interest to the works managers and technical staffs of concerns interested in the automobile industry. One of these, written jointly by Dr. R. Seligman, Ph.Nat.D., and Mr. F. J. Willot, deals with the " Analyses of aluminium and its alloys." The increasing number of uses to which aluminium is now being applied makes it most desirable that everything appertaining to that metal, and its various alloys, should be standardized, and, amongst other things, the methods of its analysis. The technical methods described in this paper have been in use for a number of years, and it is hoped that they may form the basis for a future standard course of analysis. The aluminium of commerce contains from 0.15 to 0.6 of iron, 0.2 to 0.7 of silicon, and 0.02 to 0.(16 of sodinin, together with traces of carbon, oxygen and nitrogen, whilst, occasionally, small quantities of copper are to be found. The purity of the metal varies from about 98.5 up to more than 99.75 in exceptional cases. Owing to the impossibility of estimating the aluminium itself with sufficient accuracy, it is customary to determine all the impurities and to calculate the purity of the metal from the figures an obtained. In most cases, only those impurities present in appreciable quantities are estimated course which has been fostered by the general ignorance of the influence on the properties of the metal of the minute quantities of the ingredients thus ignored. It is hoped that information will shortly be forthcoming as to the effect of these materials on the metal, so that the methods will have to be modified in this respect.

The paper included a detailed description of the methods of estimating silicon, iron and sodium, together with figures indicating the accuracy of the various determinations The alloys of aluminium in common use contain, in addition to the impurities already cited, copper, zinc, nickel and magnesium, and, as an additional impurity, lead. Alloys containing tin are met with in the form of solders or soldered joints. The metluxls which the authors use for determining these ingredients are described. Occasionally manganese, titanium and tungsten have to he dealt with, and brief reference to the determination of these elements is made by the authors, who are of the opinion that the closer study to which these alloys are being submitted will enhance their importance and promote their wider introduction.

The " Contribution to the study of phosphor bronze," by Mr. O. F. Hudson, M.Sc., and Mr. E. F. Law, A.R.S.M., is of more than general interest, chiefly on account of the data it contains relative to bronzes such as are employed for the main and big-end bearings of engines, and other wearing parts on both petrol and steam wagons. The paper includes a diagram which shows the constitution of all the bronze alloys containing up to about 25 per cent. of tin. For practical purposes, phosphor bronzes may now be divided into two classes: (1) malleable phosphor bronzes containing relatively mall amounts of tin and phosphorus—not more than about 6 per cent. of. tin and 0.3 per cent. of phosphorus; and (2) cast phosphor bronzes containing in some eases as much as 12 per cent. of tin and 1.5 per cent. of phosphorus. The malleable phosphor bronzes consist of a homogeneous solid solution of tin and phosphorus in (sapper, or they may contain some phosphide of copper in the form of small rounded particles evenly distributed throughout the mass of the alloy. The cast alloys contain the ternary eutectic with some phosphide of copper. The ternary eutectic is exceedingly hard, while, at the same time, it possesses a good crushing strength, and it is to this constituent that the phosphor bronzes owe their property of resisting wear. The paper also includes notes on the examination and analysis of phosphor bronzes, and is illustrated by a number of photo-micrographs illustrating the structure of the alloys.