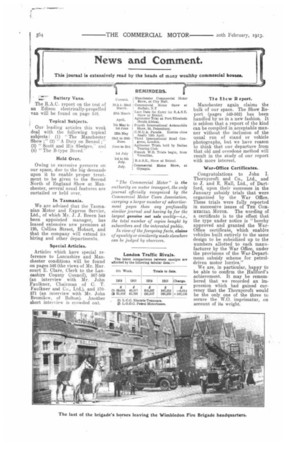 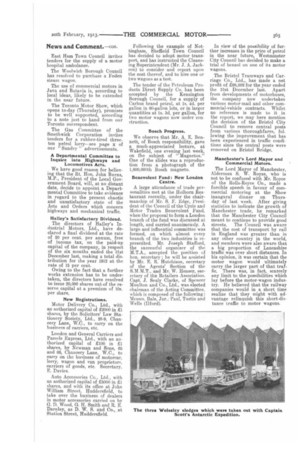 This journal is extensively read by the heads of many wealthy commescial houses.

The R.A.C. report on the test of an Edison electrically-propelled van will be found on page 545.

Our leading articles this week deal with the following topical subjects:(1) "The Manchester Show ;" (2) "A Duty on Benzol ;"

Owing to excessive pressure on our space, due to the big demands upon it to enable proper treatment to be given to the Second North of England Show at Manchester, several usual features are curtailed or held over, In Tasmania.

We are advised that the Tasmanian Motor and Express Service, Ltd., of which Mr. J. J. Breen has been appointed managers has leased extensive new premises at 125, Collins Street, Hobart, and that the company will extend its hiring and other departments.

Articles which have special reference to Lancashire and Manchester conditions will be found on pages 546 (the views of Mr. Harcourt E. Clare, Clerk to the Lancashire County Council), 567-569 (an interview with Mr. John Faulkner, Chairman of C. T. Faulkner and Ca),, Ltd.), and ,570571 (an interview with Mr. John Bromilow, of Bolton). Another short interview is ctowded out. "The Commercial Motor" is the authority on motor transport, the only journal officially recognized by the Commercial Motor Users Association, carrying a larger number of advertisement pages than any professedly similar journal and having by far the largest genuine net sale -weekly—i.e., the total number of copies bought by subscribers and the interested public, In view of the foregoing facts, claims of equality or similarity made elsewhere can be judged by observers. Tie Etcw Report.

Manchester again claims the bulk of our space. The Show Report (pages 549-562) has been handled by us in a new fashion. It is seldom that a report of the kind can be compiled in acceptable manner without the inclusion of the usual run of stand or vehicle photographs, but we have reason to think that our departure from that old and overdone method will result in the study of our report with more interest.

Congratulations to John I. Thornycroft and Co., Ltd., and to J. and E, Hall, Ltd., of Dartford, upon their successes in the January subsidy trials that were organized by the War Office. These trials were fully reported in successive issues of THE COMMERCIAL MOTOR. The wording of a certificate is to the effect that the type under notice is "hereby approved and granted the WarOffice certificate, which enables vehicles built entirely to the same design to be subsidized up to the numbers allotted to each manufacturer by the War Office, under the provisions of the War-Department subsidy scheme for petroldriven motor lorries."

We are, in particular, happy to be able to confirm the Hallford's achievement. It may be remembered that we recorded an impression which had gained currency that the Thornycroft would be the only one of the three to secure the W.O. imprimatur, on account of its weight.

The Woolwich Borough Council has resolved to purchase a Foden steam wagon.

The use of commercial motors in Java and Batavia is, according to local ideas, likely to be extended in the. near future.

The Toronto Motor Show, which opens to-day (Thursday), promises to be well supported, according to a note just to hand from our Toronto correspondent.

The Gas Committee of the Smethwick Corporation invites tenders for a rubber-tired threeton petrol lorry—see page x of our " Sundry " advertisements.

A Departmental Committee to Inquire into Highways and Locomotives Acts, We have good reason for believing that the Rt. Hon. John Burns, M.P., President of the Local Government Board, will, at no distant date, decide to appoint a Departmental Committee to take evidence in regard to the present chaotic and unsatisfactory state of the Acts and Orders which concern highways and mechanical traffic.

The directors of Halley's Industrial Motors, Ltd., have declared a final dividend at the rate of 20 per cent. per annum, free of income tax, on the paid-up capital of the company, in respect of the six months ended the 31st December last, making a total distribution for the year 1912 at the rate of 15 per cent.

Owing to the fact that a further works extension has to be undertaken, the directors have resolved to issue 20,000 shares out of the reserve capital at a premium of 10s. per share.

Motor Delivery Co., Ltd., with an authorized capital of £2000 in R1 shares, by the Solicitors' Law Stationery Society, Ltd., 26-9, Chancery Lane, W.C., to carry on the business of carriers, etc.

London and General Carriers and Parcels Express, Ltd., with an authorized capital of £100 in £1 shares, by Newman and Sons, 65 and 66. Chancery Lane, W,C., to carry on the business of motorcar, lorry, wagon and van proprietors. carriers of goods, etc. Secretary, E. Davies.

Auto Accessories Co., Ltd., with an authorized capital of 25000 in £1 shares, and with its office at John William Street, Huddersfield, to take over the business of dealers in motor accessories carried on by Q. D. Wood, G. H. Smith and R. E. Darnley, as D. W. S. and Co., at Station Street, Huddersfield.

Following the example of Nottingham, Sheffield Town Council has decided to adopt motor transport, and has instructed the Cleansing Superintendent (Mr. J. A. Jackson) to consider and report upon the cost thereof, and to hire one or two wagons as a test.

The tender of the Petroleum Products Direct Supply Co. has been accepted by the Kensington Borough Council, for a supply of Carbus brand petrol, at is. 4d. per gallon in 60-gallon lots, or in larger quantities at is. 3d. per gallon, for two motor wagons now under construction.

We observe that Mr. A. E. Bennett, of Bosch responsibility, gave a much-appreciated lecture, at Wakefield, one evening last week, on the subject of "Magnetos." One of the slides was a reproduction from a photograph of the 1,600,000th Bosch magneto.

A large attendance of trade personalities met at the Holborn Restaurant recently, under the chairmanship of Mr. S. F. Edge, President of the Council of the Cycle and Motor Trades Benevolent Fund, when the proposal to form a London branch of the fund was discussed at length, and carried unanimously. A large and influential committee was formed, on which almost every branch of the two industries is represerited. Mr. Joseph Stafford, the successful organizer of the M.T.A., accepted the position of hon. secretary ; he will be assisted by Mr. E. R. Hutchison, secretary of the Agents' Section of the S.M.M.T., and Mr. W. Henser, secretary of the Retailers Association. Capt. J. Sealy Clarke, of Spencer Moulton and Co., Ltd., was elected chairman of the Acting Committee, which is composed of the following : Messrs. Bale, Jim; Paul. Tustin and Wells (Ilford). In view of the possibility of further increases in the price of petrol in the near future, Westminster City Council has decided to make a trial of benzol on one of its motor wagons.

The Bristol Tramways and Carriage Co., Ltd., has made a net profit of £68,202 for the year ended the 31st December last. Apart from developments of motorbuses, the company now undertakes various motor-mail and other commercial-vehicle contracts. Whilst no reference is made to it in the report, we may here mention the decision of the Bristol City Council to remove central posts from various thoroughfares, following the improvement that has been experienced in traffic conditions since the central posts were removed on Bristol Bridge.

The Lord Mayor of Manchester, Alderman S. W. Royse, who is not to be confused with Mr. Royce of the Rolls-Royce Co., made a forcible speech in favour of commercial motoring at the Show inaugural dinner on Thursday of last week. After giving statistics to indicate the growth of Manchester trade, he remarked that the Manchester City Council meant to continue to provide good streets. The Council was aware that the cost of transport by rail in England was greater than in any other country in the world, and members were also aware that a big proportion of Lancashire traffic was over short distances. In his opinion, it was certain that the motor wagon would ultimately carry the larger part of that traffic. There was, in fact, scarcely any limit to the possibilities which lay before the motor-wagon industry. He believed that the railway companies would in a short time realize that they might with advantage relinquish this short-distance traffic to motor wagons.