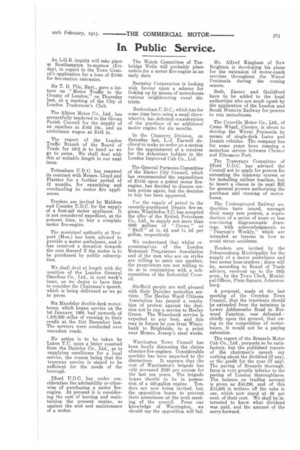 Page 19, 20th February 1913 — In Public Service.
Close
Noticed an error?
If you've noticed an error in this article please click here to report it so we can fix it.
Keywords : Dearborn, Michigan, Ford Motor Company, Transport

An L.G.B. inquiry will take place at Southampton to-morrow (Friday), in regard to the Town Council's application for a loan of £1000 for fire-station extension.

Sir T. D. Pile, Bart., gave a lecture on " Motor Traffic in the County of London," on Thursday last, at a meeting of the City of London Tradesmen's Club.

The Albion Motor Co., Ltd., has successfully tendered to the Govan Parish Council for the supply of an omnibus at £462 10s., and an ambulance wagon at 2453 5s.

The report of the London Traffic Branch of the Board of Trade for 1912 is to hand as we go to press. We shall deal with this at suitable length in our next issue.

Tottenham U.D.C. has renewed its contract with Messrs. Lloyd and Plaister for a further period of 12 months, for examining and overhauling its motor fire appliances.

Tenders are invited by Maidens and Coombe U.D.C. for the supply of a first-aid motor appliance. It is not considered expedient, at the present time, to buy a, complete motor fire-engine.

The municipal authority at Newport. (Mon) has been advised to provide a motor ambulance, and it has received a donation towards the cost thereof if the motor is to be purchased by public subscription.

We shall deal at length with the position of the London General Omnibus Co., Ltd., in next week's issue, as we desire to have time to consider the Chairman's speech, which is being delivered as we go to press.

Six Maudslay double-deck motorbuses, which began service on the let January, 1906, had upwards of 1,200.000 miles of running to their credit at the 31st December last. The services were conducted over macadam roads.

No action is to be taken by Luton T.C. upon a letter received from the Daimler Co., Ltd., as to supplying omnibuses for a local service, the reason being that the tramway service is stated to be sufficient for the needs of the borough.

Ilford U.D.C. has under consideration the advisability or otherwise of purchasing a motor fireengine. At present it is considering the cost of horsing and maintaining the present engine, as against the cost and maintenance of a motor. The Watch Committee of Tunbridge Vella will probably place orders for a motor fire-engine at an early date.

Barnsley Corporation is looking with favour upon a scheme for linking up by means of motorbuses various neighbouring rural districts.

13eckenham U.D.C., which has for some time been using a small threewheeler, has deferred consideration of the purchase of an additional motor engine for six months.

In the Chancery Division, on Saturday last, L.-J. Farwell declined to make an order on a motion for the appointment of a receiver for the debenture holders in the London Improved Cab Co., Ltd.

The General Purposes Committee of the Exeter City Council, which has recommended the expenditure of 21155 upon a petrol motor fireengine, has decided to discuss certain points again, but the decision to buy has been approved.

For the supply of petrol to the recently-purchased Dennis fire-engines, Wimbledon T.C. has accepted the offer of the British Petroleum Co., Ltd., to supply not more than 3000 gallons of " Crown " or " Shell" at Is. 4d. and 1s. 5d. per gallon, respectively.

We understand that whilst representatives of the London Motoreab Proprietors Association and of the men who are on strike are willing to meet one another, the proprietors are not willing to do so in conjunction with a subcommittee of the Industrial Council.

Sheffield people are well pleased with their Daimler motorbus services. The Fleeley Ward Citizens Association has passed a resolution of protest against the decision not to run a service to Ffeeley Green. The Wincobank service is expected to pay best, and this may in future be run from Winco bank to Brightside, to a point near Messrs, Jessop's steel works.

Warrington Town Council has been busily discussing the claims of motor fire-engines. Considerable acerbity has been imparted to the discussions. It appears that the cost of Warrington's brigade has only averaged 2520 per annum for the last ten years. The brigade hopes shortly to he in possession of a 450-gallon engine. Tenders are now being invited, but the opposition hopes to prevent their aecenta,nce at the next meeting of the council. From our knowledge of Warrington, we should say the opposition will fail. Mr. Alfred Kingham of New Brighton is developing his plans for the extension of motor-coach services throughout the Wirral Peninsula during the coming season.

Bath, Exeter and Guildford have to he added to the local authorities who are much upset by the application of the London and South Western Railway for powers to run motorbuses.

The Crosville Motor Co., Ltd., of Crane Wharf, Chester, is about to develop the Wirral Peninsula by means of single-deck Lacre and Dennis vehicles. The company has for some years been running a motorbus service between Chester and Ellesmere Port.

The Tramways Committee of Ilford U.D.C. has advised the Council not to apply for powers for extending the tramway system or for installing railless traction, but to insert a clause in its next Bill for general powers authorizing the purchase and running of motorbuses.

The Underground Railway authorities have issued, amongst their many new posters, a reproduction of a series of more or less convincing diagrammatic drawings, with acknowledgments to " Pearson's Weekly," which are intended as lessons in how to avoid street accidents.

Tenders are invited by the Johannesburg Municipality for the supply of a. motor ambulance and two motor hose-tenders these will be, according to Board of Trade advices, received up to the 28th prox. by the Town Clerk, Municipal Offices, Plein Square, Johannesburg.

A proposal, made at the last meeting of the Croydon Town Council, that the tramways should be extended from the terminus in Lower Addisoombe Road to Norwood Junction, was defeated— chiefly upon the ground, that owing to the competition of motor buses, it would not be a paying extension.

The report of the Brussels Motor Cab Co., Ltd.. purports to be satisfactory, but the published reports of the chairman's speech say nothing about the dividend (if any), or the profit for the year (if any). The paving of Brussels thoroughfares is very greatly inferior to the paving of London thoroughfares. The balance on trading account is given as £44,226, and of this £15,935 is written off the cabs in use, which now stand at 69 per cent. of their cost. We shall be interested to know what dividend was paid, and the amount of the carry-forward.