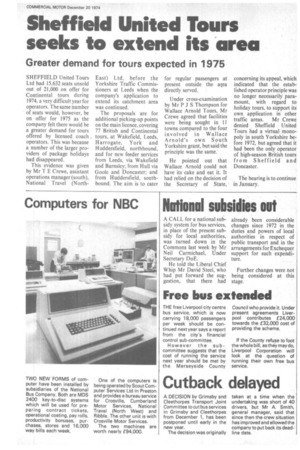 Page 17, 20th December 1974 — Free bus extended
Close
Noticed an error?
If you've noticed an error in this article please click here to report it so we can fix it.

THE free Liverpool city centre bus service, which is now carrying 18,000 passengers per week should be continued next year says a report from the city's financial control sub-committee.

However the subcommittee suggests that the cost of running the service next year should be met by the Merseyside County Council who provide it. Under present agreements Liverpool contributes £24,000 towards the £32,000 cost of providing the scheme.

If the County refuse to foot the whole bill, as they may do, Liverpool Corporation will look at the question of running their own free bus service.