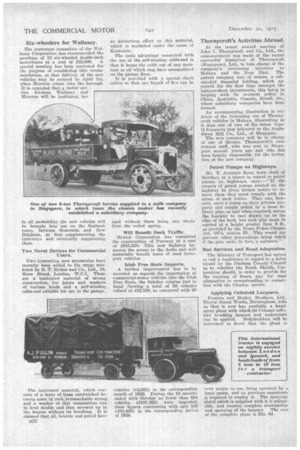 At the recent annual meeting of John I. Thornycroft. and Co., Ltd., the announcement was made of the recent successful formation of Thornyeroft (Singapore), Ltd., to take charge of the company's increasing interests in Malaya and the Near East. The parent company has, of course, a substantial financial holding, which appeared for the first time amongst the balance-sheet investments, this being in keeping with its overseas policy in China, Australia, Canada, Brazil, etc., where subsidiary companies have been formed.

An accompanying illustration is evidence of the increasing use of Thornycroft vehicles in Malaya, illustrating as it does one of two of the latest typeQ 6-tonners just delivered to the AngloSwiss Mill (Io., Ltd., of Singapore.

The new company will be in charge of one of Messrs. Thornycroft's own trained staff, who was sent to Singapore several years ago and who has been largely responsible for the formation of the new company.