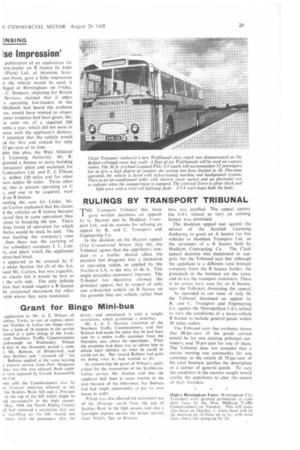 Page 31, 20th August 1965 — RULINGS BY TRANSPORT TRIBUNAL
Close
Noticed an error?
If you've noticed an error in this article please click here to report it so we can fix it.

THE Transport Tribunal this week gavewritten decisions on appeals by G. Hayton and by Hoddam Transport Ltd.; and its reasons for refusing an appeal by R. and C. Transport and Engineering Co.

In the decision on the Hayton appeal (The COmmercial. Motor, July 16), the Tribunal agrees that the appellant's conduct as a haulier should affect the • decision but disagrees that a limitation of operating radius, as applied by the Northern LA, is the way to do it. This might prejudice customers' interests. The Tribunal has therefore allowed the principal appeal, but in respect of only one articulated vehicle on B licence on the grounds that one vehicle, rather than

two, was justified. The appeal against the LA's refusal to vary an existing licence was dismissed.

The Hoddam appeal was against the.

refusal' of the Scottish , Licensing Authority to grant an A licence for five vehicles to 'Hoddam Transport Ltd. on the surrender of a B licence held by Hoddam Contracting CO. The Clark • appeal decision was mentioned in support, but the Tribunal says that although the appellant is a different (and limited) company from the B licence holder, the principals in the business are the same, and so are the transport customers. There is no prima facie case for an A licence, says the Tribunal, dismissing the appeal.

As recorded in our issue of July 30, the Tribunal dismissed an appeal by R. and C. Transport and Engineering Co. against the Metropolitan LA's refusal to vary the conditions of a seven-vehicle B licence to include general goods within 30 miles radius.

The Tribunal says that evidence shows that RO per cent of the goods carried would be for two existing principal customers. and 70 per cent for one of them. The Tribunal does not consider that a carrier moving one commodity for one customer to the extent of 70 per cent of his total business justifies the description of a carrier of general goods. To vary the condition in the manner sought would enable the appellants to alter the nature of their business.