"Keep the Wheels of Industry Turning." 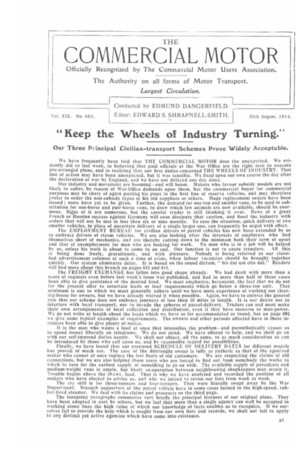 Page 1, 20th August 1914 — "Keep the Wheels of Industry Turning."
Close
Noticed an error?
If you've noticed an error in this article please click here to report it so we can fix it.

We have frequently been told that THE COMMERCIAL MOTOR does the unexpected. We evi= dently did so last week, in believing that paid officials at the War Office are the right men to execute pre-arranged plans, and in realizing that our first duties concerned THE WHEELS OF INDUSTRY. That line of action may have been unexpected, but it was sensible. We fixed upon our own course the day after the declaration of war by England, and we have not delayed one day since. Our industry and movement are booming—and will boom. Makers who favour subsidy models are not likely to suffer, by reason of War-Office demands upon them, but the commercial buyer for commercial purposes may be chary of again putting his plant in the first fine of reserve vehicles, and may therefore prefer to order the non=subsidy types of his old suppliers or others. Huge replacement orders have been issued ; more have yet to be given, Further, the demand for one-ton and smaller vans, to be used in sub= stitution for one-horse and pair-horse vans, to draw which few animals are now available, should be enor= mous. Signs of it are numerous, but the careful trader is still thinking it over. News of a great French or Russian success against Germany will soon dissipate that caution, and flood the industry with orders that will not he met in less than six or nine months. To ease the situation, (nick delivery of two smaller vehicles, in place of uncertain delivery of a single larger one, can frequently be urged with effect.

The EMPLOYMENT BUREAU for civilian drivers of petrol vehicles has now been extended by us to embrace drivers of steam vehicles. We are also looking after the interests of employers who find themselves short of mechanics, and are thereby cutting down to the minimum both their term of upset and that of unemployment for men who are looking for work. No man who is in a job will be helped by us, unless his work is about to come to an end. Our function is not to cause transfers. All this is being done freely, gratuitously, and with pleasure. Nobody is being referred to our ciassified advertisement columns at such a time of crisis, when labour vacancies should be brought together quickly. Our system eliminates delay. It is based on the sound dictum, " bis dat qui cito dat." Readers will find more about this branch on pages 613 and 619.

The FREIGHT EXCHANGE has fallen into good shape already. We had dealt with more than a

score of requests even before last week's issue was published, and had in more than half of these cases been able to give assistance of the desired kind. We must emphasize, hereanent, the fact that we do not for the present offer to entertain loads or load requirements which go below a three-ton unit. That minimum is one to which we must generally adhere until we have more experience of working our clear= ing-house for owners, but we have already waived it when possible. Again, we have to enforce the general rule that our scheme does not embrace journeys of less than 30 miles in length. It is our desire not to interfere with local transport, nor to invade the spheres of parcel=delivery. Traders can and must make their own arrangements of local collection and distribution, even if they have recourse to man-power. We do not write at length about the loads which we have so far accommodated or found, but on page 698 we give some typical examples of requirements. The owners and other persons affected have in these in= stances been able to give plenty of notice.

It is the man who wants a load at once that intensifies the problem—and parenthetically causes us to spend money liberally on telegrams. We do not mind. We have offered to help, and we shall go on with our self-imposed duties keenly. We shall not object, all the same, to as much consideration as can be introduced by those who call upon us, and by reasonable regard for possibilities.

Finally, we have found that our prepared SCHEDULE OF DELIVERY DATES for different models

has proved of much use. The case of the distraught owner is fully as pathetic as that of the agonized maker who cannot at once replace the lost fleets of old customers. We are respecting the claims of old connections, but we are also helping those users who are forced to find out front somebody the works to which to turn for the earliest supply of something to o on with. The available supply of parcelcars and medium-weight vans is ample, but likely co=operation between neighbouring shopkeepers may strain it. Trouble begins above the 30-cwt. load. That is why we have analysed and recorded the position of all makers who have elected to advise us, and why we intend to revise our lists from week to week.

The cry still is for three-tonners and four-lonners. They were literally swept away by the War Department. Staunch supporters of the petrol vehicle have in some cases turned to the high=speed, rub= her-tired steamer. We deal with its claims and prospects on the third page. The foregoing paragraphs summarize very briefly the principal features of our original plans. They

have been adopted in part by others, but we feel that more than a single agency can well he occupied in working along lines the high value of which our knowledge of facts enables us to recognize. If we our selves fail to provide the help which is sought from our own lists and records, we shall not fail to apply to any distinct yet active agencies which have come into existence.