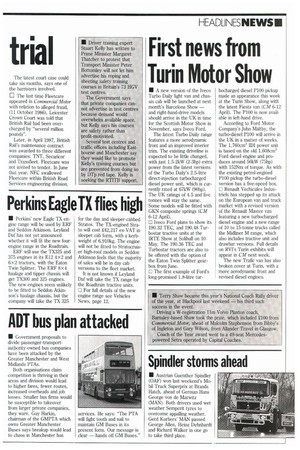 • A new version of the Iveco Turbo Daily light van and chassis cab will be launched at next month's Barcelona Show — and right-hand-drive models should arrive in the UK in time for the Scottish Motor Show in November, says Iveco Ford.

The latest Turbo Daily range features a more aerodynamic front and an improved interior trim. The existing driveline is expected to be little changed, with just 1.5-2kW (2-3hp) extra power from the latest versions of the Turbo Daily's 2.5-litre direct-injection turbocharged diesel power unit, which is currently rated at 67kW (90hp). The UK ratings of 4.5 and five tonnes will stay the same. Some models will be fitted with GKN composite springs (CM 6-12 April).

▪ Iveco Ford plans to show its 190.32 TEC, and 190.48 Turbostar tractive units at the 1RTE Show at Solihull on 10 May. The 190.36 TEC and Turbostar tractors are also to be offered with the option of the Eaton Twin Splitter gearbox from June, ▪ The first example of Ford's long-promised 1,8-litre tur bocharged diesel P100 pickup made an appearance this week at the Turin Show, along with the latest Fiesta van (CM 6-12 April). The P100 is now available in left-hand drive.

According to Ford Motor Company's John Maltby, the turbo-diesel P100 will arrive in the UK in a matter of weeks. The 1,760cm3 IDI power unit is based on the old 1, 60&m Ford diesel engine and produces around 56kW (75hp) with 152Nm of torque. As with the existing petrol-engined P100 pickup the turbo-diesel version has a five-speed box. LI Renault Vechicules Industriels has stepped up its attack on the European van and truck market with a revised version of the Renault Master van featuring a new turbocharged diesel engine and a new range of 10 to 15-tonne trucks called the Midliner M range, which also includes tractive unit and drawbar versions. Full details on RVI's Turin exhibits will appear in CM next week.

The new Trafic van has also broken cover at Turin, with a more aerodynamic front and revised diesel engines.