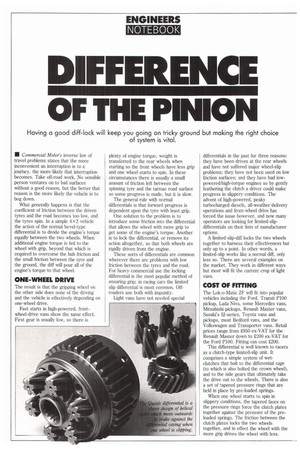 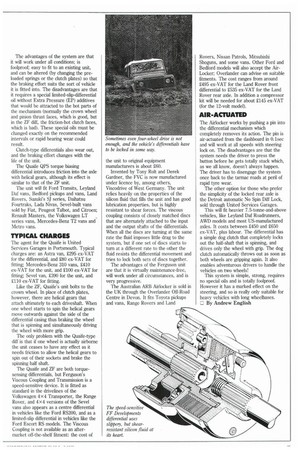 Having a good diff-lock will keep you going on tricky ground but making the right choice of system is vital.

• Commercial Motor's inverse law of travel problems states that the more inconvenient an interruption is to a journey, the more likely that interruption becomes, Take off-road work. No sensible person ventures on to bad surfaces without a good reason, but the better that reason is the more likely the vehicle is to bog down.

What generally happens is that the coefficient of friction between the driven tyres and the road becomes too low, and the tyres spin. In a simple 4x2 vehicle the action of the normal bevel-type differential is to divide the engine's torque equally between the two wheels. When additional engine torque is fed to the wheel with grip, beyond that which is required to overcome the hub friction and the small friction between the tyre and the ground, the diff will pour all of the engine's torque to that wheel.

The result is that the gripping wheel on the other side does none of the driving and the vehicle is effectively depending on one-wheel drive.

Fast starts in high-powered, frontwheel-drive vans show the same effect. First gear is usually low, so there is plenty of engine torque, weight is transferred to the rear wheels when starting so the front wheels have less grip and one wheel starts to spin. In these circumstances there is usually a small amount of friction left between the spinning tyre and the tarmac road surface so some progress is made, but it is slow.

The general rule with normal differentials is that forward progress is dependent upon the tyre with least grip.

One solution to the problem is to introduce some friction into the differential that allows the wheel with more grip to get some of the engine's torque. Another is to lock the differential, or remove its action altogether, so that both wheels are rigidly driven from the engine.

These sorts of differentials are common wherever there are problems with low friction between the tyres and the road. For heavy commercial use the locking differential is the most popular method of ensuring grip; in racing cars the limited slip differential is most common. Offroaders use both with impunity.

Light vans have not needed special differentials in the past for three reasons: they have been driven at the rear wheels and have not suffered major wheel-slip problems; they have not been used on low friction surfaces; and they have had lowpowered/high-torque engines so by gently feathering the clutch a driver could make progress in slippery conditions. The advent of high-powered, peaky turbocharged diesels, all-weather delivery operations and front-wheel drive has forced the issue however, and now many operators are looking for limited-slipdifferentials on their lists of manufacturer options.

A limited-slip-cliff locks the two wheels together to harness their effectiveness but only up to a point. In other words, a limited-slip works like a normal cliff, only less so. There are several examples on the market. They work in different ways but most will fit the current crop of light vans.

The Lok-o-Matic 'LE will fit into popular vehicles including the Ford, Transit P100 pickup, Lada Niva, some Mercedes vans, Mitsubishi pickups, Renault Master vans, Suzuki's Si-series, Toyota vans and pickups, most Bedford vans, and the Volkswagen and Transporter vans. Retail prices range from £950 ex-VAT for the Renault Master down to £200 ex-VAT for the Ford P100. Fitting can cost £200.

This differential is well known to racers as a clutch-type limited-slip unit. It comprises a simple system of wetclutches that bolt to the differential cage (to which is also bolted the crown wheel), and to the side gears that ultimately take the drive out to the wheels. There is also a set of tapered pressure rings that are held in place by pre-loaded springs.

When one wheel starts to spin in slippery conditions, the tapered faces on the pressure rings force the clutch plates together against the pressure of the preloaded springs. The friction between the clutch plates locks the two wheels together, and in effect the wheel with the more grip drives the wheel with less. The advantages of the system are that it will work under all conditions; is foolproof; easy to fit to an existing unit, and can be altered (by changing the preloaded springs or the clutch plates) so that the braking effort suits the sort of vehicle it is fitted into. The disadvantages are that it requires a special limited-slip-differential oil without Extra Pressure (EP) additives that would be attracted to the hot parts of the mechanism (normally the crown wheel and pinion thrust faces, which is good, but in the ZF cliff, the friction-hot clutch faces, which is bad). These special oils must be changed exactly on the recommended intervals or rapid bearing wear could result.

Clutch-type differentials also wear out, and the braking effort changes with the life of the unit.

The Quaife QPS torque biasing differential introduces friction into the axle with helical gears, although its effect is similar to that of the ZF unit.

Like the ZF, Quaife's unit bolts to the crown wheel. In place of clutch plates, however, there are helical gears that attach ultimately to each driveshaft. When one wheel starts to spin the helical gears move outwards against the side of the differential casing thus braking the wheel that is spinning and simultaneously driving the wheel with more grip.

The only problem with the Quaife-type diff is that if one wheel is actually airborne the unit ceases to have any effect as it needs friction to allow the helical gears to spin out of their sockets and brake the spinning half shaft.

The Quaife and ZF are both torquesensing differentials, but Ferguson's Viscous Coupling and Transmission is a speed-sensitive device. It is fitted as standard in the drivelines of the Volkswagen 4x4 Transporter, the Range Rover, and 4 x4 versions of the Sevel vans also appears as a centre differential in vehicles like the Ford R5200, and as a limited-slip differential in vehicles like the Ford Escort RS models. The Viscous Coupling is not available as an aftermarket off-the-shelf fitment: the cost of the unit to original equipment manufacturers is about 260.

Invented by Tony Rolt and Derek Gardner, the FVC is now manufactured under licence by, among others, Viscodrive of West Germany. The unit relies heavily on the properties of the silicon fluid that fills the unit and has good lubrication properties, but is highly resistant to shear forces. The viscous coupling consists of closely matched discs that are alternately attached to the input and the output shafts of the differentials. When all the discs are turning at the same rate the fluid imposes little drag to the system, but if one set of discs starts to turn at a different rate to the other the fluid resists the differential movement and tries to lock both sets of discs together.

The advantages of the Ferguson unit are that it is virtually maintenance-free, will work under all circumstances, and is very progressive.

The Australian ARB Airlocker is sold in the UK through the Overiander Off-Road Centre in Devon. It fits Toyota pickups and vans, Range Rovers and Land Rovers, Nissan Patrols, Mitsubishi Shoguns, and some vans. Other Ford and Bedford models will also accept the AirLocker; Overlander can advise on suitable fitments. The cost ranges from around £495 ex-VAT for the Land Rover front differential to 2535 ex-VAT for the Land Rover rear axle. In addition a compressor kit will be needed for about 2145 ex-VAT (for the 12-volt model).

The Airlocker works by pushing a pin into the differential mechanism which completely removes its action. The pin is air-actuated from the dashboard in 0.1sec and will work at all speeds with steering lock on. The disadvantages are that the system needs the driver to press the button before he gets totally stuck which, as we all know, doesn't always happen. The driver has to disengage the system once back to the tarmac roads at peril of rapid tyre wear.

The other option for those who prefer the simplicity of the locked rear axle is the Detroit automatic No Spin Diff Lock, sold through United Services Garages.

This will fit heavier 7.5-tonne-and-above vehicles, like Leyland Daf Roadrunners, AWD models and most US-manufactured axles. It costs between £450 and 2650 ex-VAT, plus labour. The differential has a simple dog clutch that completely locks out the half-shaft that is spinning, and drives only the wheel with grip. The dog clutch automatically throws out as soon as both wheels are gripping again. It also enables adventurous drivers to handle the vehicles on two wheels!

This system is simple, strong, requires no special oils and is totally foolproof. However it has a marked effect on the steering, and so is really only suitable for heavy vehicles with long wheelbases.