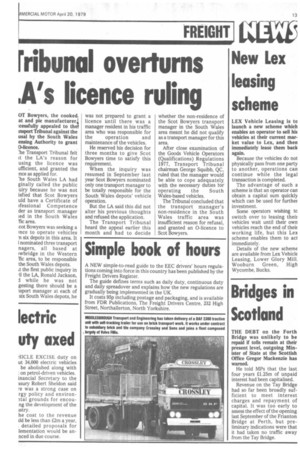 Page 15, 20th April 1979 — Tribunal overturns .A's licence ruling
Close
Noticed an error?
If you've noticed an error in this article please click here to report it so we can fix it.
Keywords : Public Inquiry, Law / Crime

OT Bowyers, the cooked: at and pie manufacturer4 :cessfully appealed to thet msport Tribunal against the usal by the South Wales ensing Authority to grant 0-licence.

he Transport Tribunal felt Lt the LA's reason for using the licence was ufficient, and granted the nce as applied for.

'he South Wales LA had ginally called the public uiry because he was not isfied that Scot Bowyers uld have a Certificate of Aessional Competence der as transport manager ;ed in the South Wales Tic area.

cot Bowyers was seeking a nice to operate vehicles ii six depots in this area. It I nominated three transport nagers, all based at )wbridge in the Western 'fic area, to be responsible the South Wales depots.

the first public inquiry in il the LA, Ronald Jackson, I while he was not gesting there should be a isport manager at each of six South Wales depots, he was not prepared to grant a licence until there was a manager resident in his traffic area who was responsible for the operation and maintenance of the vehicles.

He reserved his decision for three months to give Scot Bowyers time to satisfy this requirement.

When the inquiry was resumed in September last year Scot Bowyers nominated only one transport manager to be totally responsible for the South Wales depots' vehicle operation.

But the LA said this did not alter his previous thoughts and refused the application.

The Transport Tribunal heard the appeal earlier this month and had to decide whether the non-residence of the Scot Bowyers transport manager in the South Wales area meant he did not qualify as a transport manager for this area.

After close examination of the Goods Vehicle Operators (Qualifications) Regulations 1977, Transport Tribunal chairman George Squibb, QC, ruled that the manager would be able to cope adequately. with the necessary duties for operating the South Wales-based vehicles.

The Tribunal concluded that the transport manager's non-residence in the South Wales traffic area was insufficient reason for refusal, and granted an 0-licence to Scot Bowyers.