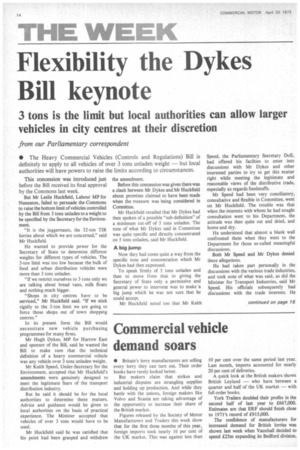 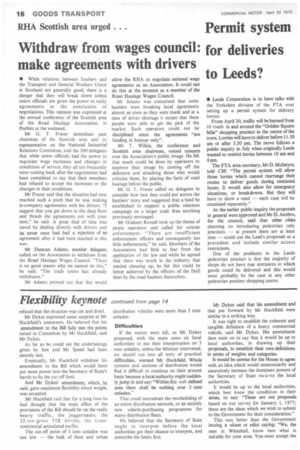 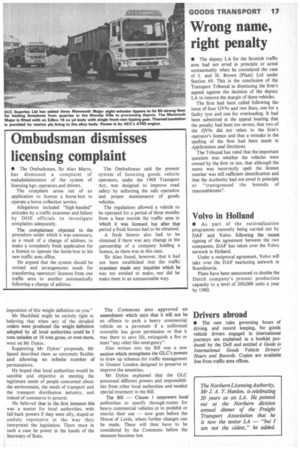 3 tons is the limit but local authorities can allow larger

vehicles in city centres at their discretion

• The Heavy Commercial Vehicles (Controls and Regulations) Bill is definitely to apply to all vehicles of over 3 tons unladen weight — but local authorities will have powers to raise the limits according to circumstances.

This concession was introduced just before the Bill received its final approval by the Commons last week.

But Mr Leslie Huckfield, Labour MP for Nuneaton, failed to persuade the Commons to raise the bottom limit of vehicles controlled by the Bill from 3 tons unladen to a weight to be specified by the Secretary for the Environment.

"It is the juggernauts, the 32-ton TIR lorries about which we are concerned," said Mr Huckfield.

He wanted to provide power for the Secretary of State to determine different weights for different types of vehicles. The 3-ton limit was too low because the bulk of food and urban distribution vehicles were more than 3 tons unladen.

"If we restrict ourselves to 3 tons only we are talking about bread vans, milk floats and nothing much bigger.

"Shops in city centres have to be serviced," Mr Huckfield said. "If we stick rigidly to the 3-ton limit we are going to force those shops out of town shopping centres."

In its present form the Bill would necessitate new vehicle purchasing programmes for many firms.

Mr Hugh Dykes, MP for Harrow East and sponsor of the Bill, said he wanted the Bill to make sure that the technical definition of a heavy commercial vehicle was any vehicle over 3 tons unladen weight.

Mr Keith Speed, Under-Secretary for the Environment, accepted that Mr Huckfield's amendments were genuinely designed to meet the legitimate fears of the transport distribution industry.

But he said it should be for the local authorities to determine these matters. Advice and guidance would be given to local authorities on the basis of practical experience. The Minister accepted that vehicles of over 3 tons would have to be used.

Mr Huckfield said he was satisfied that his point had been grasped and withdrew the amendment.

Before this concession was given there was a clash between Mr Dykes and Mr Huckfield about promises claimed to have been made when the measure was being considered in Corrmittee.

Now they had come quite a way from the specific tone and concentration which Mr Dykes had then expressed.

To speak firmly of 5 tons unladen and then to move from that to giving the Secretary of State only a permissive and general power to intervene was to make 'a big jump which he was not sure that he could accept.

Mr Huckfield noted too that Mr Keith Speed, the Parliamentary Secretary DoE, had offered his facilties to enter into discussions with Mr Dykes and other interested parties to try to get this matter right while meeting the legitimate and reasonable views of the distributive trade, especially as regards foodstuffs.

Mr Speed had been very conciliatory, consultative and flexible in Committee, went on Mr Huckfield. The trouble was that when the interests with whom he had sought consultation went to his Department, the attitude was then quite cut and dried, and home and dry.

He understood that almost a blank wall confronted them when they went to the Department for those so-called meaningful discussions.

Both Mr Speed and Mr Dykes denied these allegations.

Mr Dykes expressed some surprise at Mr Huckfield's comments. He believed that his amendment to the Bill fully met the points raised in Committee by Mr Huckfield. said Mr Dykes.

As far as he could see the undertakings given by him and Mr Speed had been entirely met.

Eventually, Mr Huckfield withdrew his amendment to the Bill which would have put more power into the Secretary of State's hands to fix the cut-off limit.

And Mr Dykes' amendment, which, he said, gave maximum flexibility about weight, was accepted.

Mr Huckfieid said that for a long time he had thought that the main effect of the provisions of the Bill should be on the really heavy traffic, the juggernauts, the 32-ton-gross TIR lorries, the transcontinental articulated outfits.

Difficulties If the matter were left, as Mr Dykes proposed, with the main onus on local authorities to put their interpretation on 3 tons unladen, unless the Minister intervened, we should run into all sorts of practical difficulties, warned Mr Huckfield. Whole systems and sections of distribution would find it difficult to continue on their present basis because a local authority might suddenly jump in and say: 'Within this well-defined area there shall be nothing over 3 tons unladen."

That could necessitate the rescheduling of an entire distribution network, or an entirely new vehicle-purchasing programme for many distribution fleets.

He believed that the Secretary of State ought to interpret before the local authorities got their chance to interpret, and prescribe the limits first.

Mr Dykes said that his amendment and that put forward by Mr Huckfield were similar in a striking way.

It was right to establish the coherent and tangible definition of a heavy commercial vehicle, said Mr Dykes. His amendment then went on to say that it would be up to local authorities, in drawing up their proposals, to establish their own definitions in terms of weights and categories.

It would be unwise for the House to agree with an idea which would unnecessarily and excessively increase the dominant powers of the Secretary of State vis-a-vis the local authorities.

It would be up to the local authorities, which best knew the conditions in their areas, to say: "These are our proposals based on our survey for January 1, 1977; these are the ideas which we wish to submit to the Government for their consideration."

This was better than the Government issuing a ukase or edict saying: "We, the men in Whitehall, know best what is suitable for your area. You must accept the imposition of this weight definition on you."

Mr Huckfield might be entirely right in believing that when any of the detailed orders were produced the weight definition adopted by all local authorities could be 5 tons unladen or 16 tons gross, or even more, went on Mr Dykes.

He hoped that local authorities would be sensible and objective in meeting the legitimate needs of people concerned about the environment, the needs of transport and the transport distribution industry, and indeed of commerce in general.

He believed that in the first instance this was a matter for local authorities, with fall-back powers if they were silly, stupid or unduly repressive in the way they interpreted the legislation. There must in such a case be power in the hands of the Secretary of State. The Commons also approved an amendment which says that it will not be an offence to park a heavy commercial vehicle on a pavement if a uniformed constable has given permission or that it was there to save life, extinguish a fire or meet "any other like emergency".

Also written into the Bill was a new section which strengthens the GLC's powers to draw up schemes for traffic management in Greater London designed to preserve or improve the amenities.

Mr Dykes explained that the GLC possessed different powers and responsibilities from other local authorities and needed special treatment in the Bill.

The Bill — Clause 1 empowers local authorities to specify through-routes for heavy commercial vehicles or to prohibit or restrict their use — now goes before the House of Lords, where further changes can be made. These will then have to be considered by the Commons before the measure becomes law.