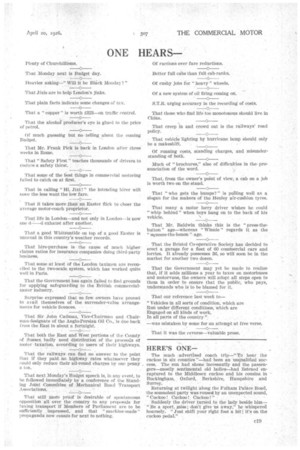 Page 3, 20th April 1926 — ONE HEARS
Close
Noticed an error?
If you've noticed an error in this article please click here to report it so we can fix it.
Keywords : Taxicab

That Monday next is Budget day.

That Jixis are to help London's links.

That plain facts indicate Some changes of tax. That a " copper " is worth 1323—on traffic control.

That the alcohol producer's eye-is glued to the price of petrol.

Of much guessing but no , telling about the coming Budget.

That Mr. Frank Pick is back in London after three" weeks in Rome.

That " Safety First" teaches thousands of drivers to endure a safety thirst.

That some of the best things in commercial motoring failed to catch on at first.

That in calling " Hi,Jixi I " the intending hirer will none the less want the low fare.

That it takes more than an Easter flick to cheer the average motor-coach proprietor.

'.11at life in London—and not only in London—is now one d • d exhaust after another.

That a good Whitsuntide on top of a good Easter is unusual in this country's weather records.

That hire-purchase is the cause of much higherclaims ratios for insurance compalaies doing third-party business.

That some at least of the London taximen are reconciled to the two-scale system, which has worked quite well in Paris.

That the Government has again failed to find grounds for applying safeguarding to the British commercial motor industry. • Surprise expreSsed that so .few. owners have proved to avail, themselves of the surrender-value arrangements for vehicle licences.

That Sir John Cadman, Vice-Chairman and Chairman-designate Of the Anglo7Persian Oil 'Co., is due back from the Bast in about a fortnight.

That bcith the East and West portions of the County of Sussex, badly need distribution of the proceeds of motor• taXation, according to users' of their highways.

That the railways can find, no answer to the point that if they paid.. no highway rates whatsoever they could only reduce their all-round charges by one penny atoll.

That next Monday's Budget speech is, in any event, to be followed immediately by a conference of the Standing Joint Committee of -Mechanical Road Transport Associations, , • • • 0 •

That still more proof is desirable of spontaneous opposition -all. ("Ver. the' country to any proposals for taxing transport if Members of Parliament are to be sufficiently , impressed, and that " ma chi ne-ma de " propaganda now, counts for next to nothing.

Of ructions over fare reductions.

Of a new system of oil firing coming on.

S.T.R. urging accuracy in the recording of costs.

That creep in and crowd out is the railways' road policy.

That vehicle lighting by hurricane lamp should only be a makeshift.

Of running costs, standing charges, and misunderstanding of both.

Much of " brochures," also of difficulties in thepro. nunciation of the word.

That, from the owner's point of view, a cab on a job is worth two on the stand.

That "who gets the bumps?" is pulling well as a slogan for the makers of the Henley air-cushion tyres.

That many a motor lorry driver wishes he could "whip behind" when boys hang on to the back of his vehicle.

That Mr, Baldwin thinks this is the " press-thebutton " age—whereas " Winnie " regards it as the "

That the Bristol Co-operative Society has decided to erect a garage for a feet of 60 commercial ears and lorries. It already possesses 36, so will soon be in the market for another two dozen.

That the Government may yet be made to realize that, if it adds millions a year to taxes on motorbuses and motorvans, the owners will adopt all steps open to them in order to ensure that the public, who pays, understands who is to be blamed for it.

That our reference last week to " Vehicles in all sorts of condition, which are

-.Run under different 'conditions, which are

Engaged on all kinds Of work, In all parts Of the country —was mistaken by some for an attempt at free verse.

That it *as the reverse—Valtiable prose.