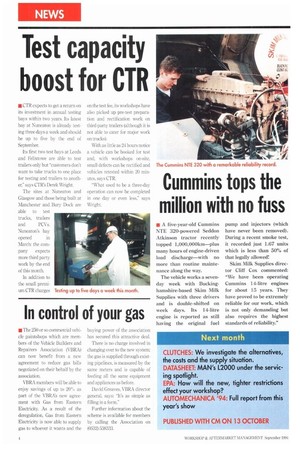 Page 88, 1st September 1994 — Test capacity boost for CTR
Close
Noticed an error?
If you've noticed an error in this article please click here to report it so we can fix it.
Keywords : Communication Design, Film Trailer, Graphic Design, Trailer

• CTR expects to get a return on its investment in annual testing bays within two years. Its latest bay at Nuneaton is already testing three days a week and should be up to five by the end of September.

Its first two test bays at Leeds and Felixtowe are able to test trailers only but "customers don't want to take trucks to one place for testing and trailers to another," says CTR's Derek Wright.

The sites at Nuneaton and Glasgow and those being built at Manchester and Bury Dock are able to test trucks, trailers and PCVs. Nuneaton's hay opened in March: the company expects more third parry work by the end of this month.

In addition to the small premium CTR charges on the test fee, its workshops have also picked up pre-test preparation and rectification work on third-party trailers (although it is not able to cater for major work on trucks).

With as little as 24 hours notice a vehicle can be booked for test and, with workshops on-site, small defects can be rectified and vehicles retested within 20 minutes, says CTR.

"What used to be a three-day operation can now be completed in one day or even less," says Wright.