No more Albions — they become Leylands 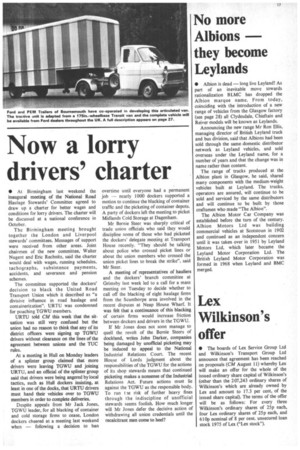 • Albion is dead — long live Leyland! As part of an inevitable move towards rationalization BLMC has dropped the Albion marque name. From today, coinciding with the introduction of a new range of vehicles from the Glasgow factory (see page 28) all Clydesdale, Chieftain and Reiver models will be known as Leylands.

Announcing the new range Mr Ron Ellis, managing director of British Leyland truck and bus division, said that Albions had been sold through the same domestic distributor network as Leyland vehicles, and sold

overseas under the Leyland name, for a number of years and that the change was in name rather than content.

The range of trucks produced at the Albion plant in Glasgow, he said, shared many components with the medium-weight vehicles built at Leyland. The trucks, operators are assured, will continue to be sold and serviced by the same distributors and will continue to be built by those craftsmen who made "The Albion".

The Albion Motor Car Company was established before the turn of the century.