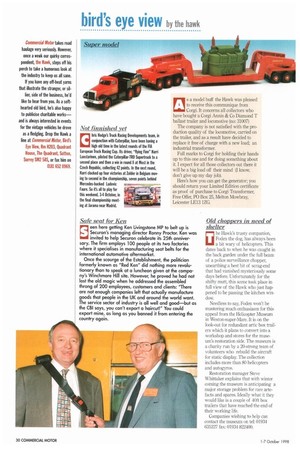 Page 32, 1st October 1998 — Safe seat for Ken
Close
Noticed an error?
If you've noticed an error in this article please click here to report it so we can fix it.
Keywords : Automotive Industry, Ken Livingstone, Aftermarket, Winchmore Hill, Ken, Belt

2 een here getting Ken Livingstone MP to belt up is Securon's managing director Ronny Proctor. Ken was invited to help Securon celebrate its 25th anniversary. The firm employs 100 people at its two factories where it specialises in manufacturing seat belts for the international automotive aftermarket.

Once the scourge of the Establishment, the politician formerly known as "Red Ken" did nothing more revolutionary than to speak at a luncheon given at the company's Winchmore Hill site. However, he proved he had not lost the old magic when he addressed the assembled throng of 200 employees, customers and clients: "There are not enough companies left that actually manufacture goods that people in the UK and around the world want. The service sector of industry is all well and good—but as the CBI says, you can't export a haircut!" You could export mine, as long as you banned it from entering the country again.